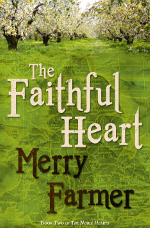 For this week’s Medieval Romance Monday, we are featuring The Faithful Heart by Merry Farmer.  This is Book Two in The Noble Hearts series.

Here is what author Merry Farmer tells us about this medieval romance:

“The Faithful Heart was a natural progression from The Loyal Heart.  It became obvious to me right away that I had something special in the characters of Jack Tanner, Madeline Matlock, and the relationship between them.  Writing their bits of The Loyal Heart was so much fun that I knew they deserved an entire story all to themselves.  I’ve also always had a special place in my heart for the lives of ordinary people in the Middle Ages.  Jack starts out his life as a peasant before fate takes him in a radically different direction.  I always knew he was capable of greatness, but I knew that the people he would find himself surrounded by would give him a hard time.

It reminds me, in a way, of growing up without money in a town full of rich people.  I was lucky enough to go to private school on a sort of scholarship, but I felt the sting of being seen as inferior by my classmates.  It filled me with the urge to prove myself, but not in a good way.  Mostly it taught me that people can be cruel for the stupidest reasons of class and money.

I drew on those experiences of inequality to tell Jack and Madeline’s story.  Both Jack and Madeline have heaps of baggage to overcome before they can be together.  In a way this is a coming of age story, especially for Jack.  He has to make a few sacrifices that will drive my readers crazy on his road to true nobility.

I’m currently working on the third book in the trilogy, The Courageous Heart, which tells the story of Ethan and Joanna as Ethan deals with the consequences of his actions in The Faithful Heart.  With a little bit of luck it should be out before the end of the year.”

You can read an excerpt from this exciting medieval romance novel and see where you can purchase it here: The Faithful Heart by Merry Farmer