Passion In The Blood – Anna Markland 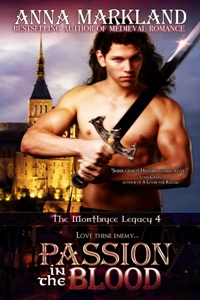 Passion In The Blood by Anna Markland

There is one man she is forbidden to love. Her family will stop at nothing to avenge a past wrong.

“Anna Markland’s historical romance of Robert and Dorianne during the upheaval between England and Normandy is sheer genius! History comes alive when one reads their story. The details are woven seamlessly into this story of true love and passion.

It is turbulent times when Robert de Montbryce decides he wants a love like his parents have shared for many years. Dorianne de Giroux’s is the total opposite as hate, vengeance and the need for power are their only friends. When her family arranges marriage to a boy of only twelve, she can’t wonder what her life will hold. But when she unwittingly falls in love with her family’s enemy, a Montbryce, all is turned upside down.

This is a rousing story of a true, abiding love, told on the backdrop of medieval history and a must for everyone! Don’t miss out…this is a great story…by an equally great story teller.”
– Lynn Crain, author of A Lover for Rachel

Free Preview of Passion In The Blood

Robert de Montbryce had never seen his brother so animated. Though born and raised together in Ellesmere Castle in England, he and Baudoin saw each other infrequently. Robert now lived in Normandie, having assumed responsibility, as the eldest son, for the ancestral castle at Montbryce. He loved Normandie. Montbryce Castle was where he belonged, but he enjoyed visiting his parents in England. He missed his family.

Robert had to admit his brother had grown up in his shadow, but Baudoin’s calm exterior belied his deeply held convictions. Robert could certainly see that passion now.

They were often mistaken for twins. As the only male offspring of their parents, the onus on them to provide heirs and to carry on the Montbryce name was heavy, and they were reminded of it more and more frequently nowadays. Robert had never been in love, but he suspected Baudoin was enamoured with Carys, the castle’s Welsh healer. He chuckled inwardly at the thought of the hornet’s nest that might unleash. The Earl of Ellesmere’s son in love with the daughter of the Earl’s nemesis, Welsh rebel chieftain Rhodri ap Owain! He would not want to be in Baudoin’s boots when their parents found out!

Most noblemen of his acquaintance would scoff at the idea of loving their wives, but Robert wanted what his parents had. They shared a deep, passionate love.

He sometimes despaired of ever finding a lifemate, a woman who would make a good Comtesse when he inherited his father’s Norman title, especially now, given the volatile political situation in Normandie.

This was the topic that had Baudoin holding forth animatedly as they relaxed in the Hall after a heavy midday meal. The air was still redolent with the aroma of roasted venison. Their parents had left as soon as they had finished eating, making an excuse. Did they believe their children were fooled? They knew full well Ram and Mabelle de Montbryce would wile away the afternoon in their chamber. Their passion had never waned over thirty years.

Rhoni and her husband Ronan, visiting from Ireland, had shared her brothers’ amusement and then gone off to their solar.

Robert chuckled. “Rhoni laughs with us, but she and Ronan cannot keep their hands off each other either.”

Baudoin startled him by banging his fist on the wooden table. “Papa is right. We’d be much better off with one ruler for Normandie and England. Serving two masters is intolerable, like walking a tightrope. What’s the sentiment in Normandie?”

Things said within the confines of Ellesmere might be considered treason by many, but Montbryces never betrayed each other. Family loyalty was paramount. Though they could hear the distant chatter of servants in the kitchens, Robert felt comfortable they were too far away to overhear. “Most of the Norman barons favour Curthose.”

Baudoin snorted. “Ah! Your namesake! The misbegotten Duke of the Normans for the past thirteen years. They’re afraid he’ll confiscate their lands if they don’t support him.”

Robert had been slouching in his chair, legs outstretched. Now he tensed and sat up. “Listen, I don’t support him because I was named for him. We in Normandie have to be mindful he has the power to take our lands.”

Baudoin nodded his understanding. “You’re right, but most Norman barons own lands in England as well, and here we have to please King William Rufus.”

Robert threw up his hands. “Who knows what the Conqueror had in mind when he divided up his empire the way he did? Normandie for Curthose, England for Rufus and gold for the scholarly Henry, who’ll no doubt be a bishop one day. If only they could get along as a family, like the Montbryces!”

Baudoin slapped his thigh and laughed at his brother’s jest. “Oui. At least you and I have never emptied chamberpots on each other’s head!”

They enjoyed the humour, remembering their parents’ disgust when news of the royal prank had reached Ellesmere years ago. Their laughter died when their father unexpectedly entered the Hall, clad only in his bed robe, his face ashen. Steward Bonhomme accompanied him, jaw clenched.

Robert and Baudoin came to their feet immediately. Both spoke at once. “What’s amiss, Papa?”

Ram clutched a parchment which he thrust at Robert. “The King is dead.”

Baudoin read the message over his brother’s shoulder. His face betrayed his shock. “William Rufus?”

Robert gasped and made the Sign of the Cross. “I can’t believe this.”

Their father swore. “Believe it! As you see, he was killed yesterday in a hunting accident in the New Forest. Your mother and I were—well, never mind. Steward Bonhomme brought the message to me as soon as it arrived. The rider insisted we get the news immediately. Since he was from the court—”

He drew his bed robe more tightly around his body and sat down wearily in a chair near the hearth, rubbing his knees.

Robert rolled the parchment and gave it back to his father. “We should go to the Map Room to discuss this. Too many people come in and out of here. We need to make some decisions.”

Baudoin strode to the door. “I’ll fetch Rhoni and Ronan.”

Bonhomme held up his hand. “I can see to that, milord Baudoin.”

You can buy Passion In The Blood at any of the online bookstores listed below.