My Noble Knight by Laurel O’Donnell

You can buy My Noble Knight at the bookstores listed below 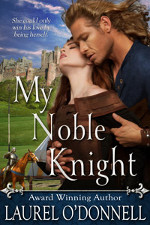