The Bravest of Them All – Laurel O’Donnell 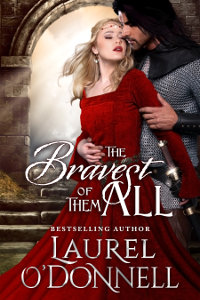 The Bravest of Them All by Laurel O’Donnell

The Bravest of Them All is a medieval romance novella.

All her life, Nessa has idolized her older sister, Melwyn, following in her footsteps, doing what she did. When Nessa falls in love with her sister’s betrothed, she is willing to sacrifice her own feelings to ensure Melwyn’s happiness.

Luke of Brackley has vowed to protect the innocent, including his lord’s daughters. Betrothed to Melwyn, Luke always believed his future lay in her arms. When he discovers Nessa has been kidnapped by an enemy, he risks everything to save her.

Will Nessa be able to keep her love for Luke a secret even as her heart breaks?

“There’s nothing to be afraid of,” Luke of Brackley announced as he carefully stepped into the dark cave, holding Melwyn’s hand.  He thrust a torch forward to light their way.  The flickering flames did little to illuminate the slick floor or wet walls.  Still, he knew it was safe.  He had searched the cave already.  He would never bring his charges, Melwyn, and her little sister Nessa, into the cave without being certain.  He was responsible for their safety; a task even at sixteen, he took seriously.

Mel had insisted on coming to the cave.  She said this was the only time they would be able to go because they would never be this far east again.  She had told him some tale of two lovers who died in the cave and were washed away into the sea.  The legend said whoever put their hands over the lovers’ bloody stain would affirm their love.  She was convinced the legend was real.

“I’m not afraid,” Mel said softly, but there was a hitch in her voice that told Luke otherwise.

Luke stepped carefully over the damp ground, guiding Mel through the slick cave.

Melwyn glanced back at the voice with a grimace on her young face.  “Why did we have to bring her?”

“Be nice, Mel,” Luke warned.  He had promised lord Tristan, the girls’ father, that he would look after them while he watched a play at the amphitheater.  Luke took a step back to light the way for Nessa.

A young girl of eight summers entered the lighted circle.  Her braided blonde hair was an imitation of Melwyn’s but Nessa’s was beginning to unravel.  Wild strands poked out from the braids and one hung along the side of her face.  Her fillet was askew and she lifted a hand to right it.  Nessa trailed Melwyn everywhere, idolizing her.  The girls even looked alike with the same nose and shaped eyes.

Luke smiled at Nessa.  He enjoyed her company.  She was bright and curious.

She stopped suddenly, staring at the ground.  Luke thought there was a spider or other insect he would have to “rescue” her from.  Suddenly, Nessa leapt into a small puddle, spraying water around her.

Mel squealed and held her arms up to protect herself from the water.  “My dress!”

Luke chuckled softly and chastised Nessa, “Perchance you should be more careful.”

“It is dark in here,” Nessa stated, ignoring him.  “What happens if the torch goes out?”

“Do you think the tide will come in?  The water probably fills this cave to the ceiling.”

“That’s what happened to the lovers’ bodies,” Melwyn explained.  “The sea claimed them.”

Nessa looked around with wide eyes.  “I didn’t know it was this cave.  Where is the blood stain?”

“It should be on the wall.”  Luke walked to the side of the cave, holding the torch toward the wall.  He strolled along the line of the wall, looking for the stain of blood the legend said was there.  The walls were gray and smooth as if someone had carved them.  But Luke knew the only artist to touch these walls was the sea.  The torchlight fell over a wall with a small patch of deep red smeared along its surface.  The dark wet stain ran down the side of the wall.  Luke had to admit it did look like blood.  He touched the dark area on the wall and looked at his fingers.  His fingers were wet, but they were not stained red.

Luke wiped his hand on his doublet.  “It’s just iron.”  He was certain it was.  He had learned of iron’s coloring in one of his lectures from Master Hugh.  He continued searching the wall.

He stopped and stepped back, moving the torch about to search the wall.  Finally, the light fell over a large red stain.  Mel had told him the story, but he didn’t believe it.  A story about two lovers who died in this very cave.  And about a blood stain that appeared on the wall near the very spot where they had died.

Luke grinned.  Leave it to Nessa to see a rabbit.  He supposed he could see the rabbit if he squinted his eyes.  Almost.

Mel grabbed his hand and pulled him to the stain.  She pressed her hand to the red wall and looked at him.  “This is it.”

Luke hesitated.  He stared down into Mel’s eyes.  Lovely smoky blue eyes.  She was so young, only thirteen summers.  Compared to his sixteen, she was a babe.  Still, she had professed her love of him.  What was he to do?  He glanced at the wall.  It wasn’t that she was ugly.  She had beautiful blonde hair and smooth skin.  He just…  didn’t believe the legend was real.  “Maybe this isn’t the right stain.”

“Of course,” he replied.  “But this…”  He shook his head and looked back at her.  It seemed silly.  A childish legend.

“Put your hand on it.  Then nothing will come between us.”

He looked at the stain again.

“We will always be in love,” Mel said.  “Just like the two lovers who died here.”

He didn’t believe the legend.  It was as simple as that, but because Mel wanted him to he put his hand on the wall.  Time stopped for a moment.  He didn’t know what he expected, a bolt of lightning to fill the cave, mystical music.  But nothing happened.  He took his hand from the cold wall.

Mel squealed and threw her arms around his neck.  “It’s done!  We’ll love each other forever!”

Mel nodded and they walked back toward the entrance of the cave.  It wasn’t until they emerged into the moonlight that Luke realized Nessa wasn’t with them.  “Stay here.  I’ll go back for her.”  He returned to the cave.  “Ness?”

Beyond the light, the darkness was complete, an impenetrable barrier.  Anxiety churned in his stomach.  “Nessa?” he called.  He moved into the cave, sweeping the torch about to search for her.  Had she fallen and hit her head?  Was she hurt and unable to answer?  The torchlight washed over her small form as she sat at the bottom of one of the walls.  Relief swept him.  “What are you doing?  You scared me.”  He squatted before her.

Her head was lowered and she picked at her green dress.  “Who am I supposed to love?”

Luke’s heart twisted for her.  It was still a game to her, always trying to keep up with her sister.  She had no idea what true love was.  “There’s lots of men out there whose heart you will break.”

Nessa shook her head; another lock of her gold hair came free from the fillet.  “I will never come back here.  How can I put my hand on the blood?”

Luke tucked the lock of wild hair behind her wrapped braid.  “You don’t have to do that to know a man loves you.”

Luke sighed softly.  He did do it with Mel, but only because she insisted.  He thought the entire affair most ridiculous.  But Nessa only wanted to do what Mel had done.  He stood.  “Fine.”  He glanced at the wall she sat beneath, sweeping the torch above their heads, searching.  He found a stain, a different one than he and Mel had touched, but it didn’t matter.  He placed his hand on it.

Nessa cocked her head to the side in confusion.

Nessa tucked her hand against her chest.  “Oh, no!  I couldn’t!  You and Mel did it already!”

“I love you as much as I love Mel,” Luke proclaimed.

Nessa stared up at him in doubt.

Luke leaned toward her with his hand on the wall.  “We don’t have to tell Mel.  It will be our secret.”

Nessa chewed on her lower lip lightly.  Then, tentatively, she placed her hand against the stain on the wall.

They stood that way for a moment, staring into each other’s eyes.

Then, Nessa giggled and pulled her hand from the wall.  “It tickles!”

Tickles?  Luke looked at the wall.  That was a strange reaction.

“That’s gross!”  Nessa wiped her hand on her dress.  “Do you really think that’s blood?”

Luke led the way out of the cave as Nessa skipped beside him.  “Probably not.  It’s what you want it to be, I suppose.”

Nessa nodded.  “I think Mel is right.  She is always right.”

Luke grinned at the child as she hurried to catch up with her sister.