Highlander is the second in her Forbidden Fantasy series along with Take Me and The Lover. Highlander is special to her because she dreamed the story – about a dispossessed Scottish noble named James, who had to fight to get his land back.

She has also sold Psychic Sex and The Shifters to Harlequin Spice Briefs. Psychic Sex was included in the Naughty Bits Anthology. Finally, she thought she’d better write something her mother could read.  Her romantic paranormal mystery, Dirty Sexy Murder, a novel set in a waxing parlor was released in 2010, quickly followed by her March 2011 release, Love, Lust and Lies.  She is currently working on a paranormal romance, The Demon Prince, which her agent Marisa Corvisiero of the L Perkins Agency is shopping around New York.

Her medieval romance novels include: 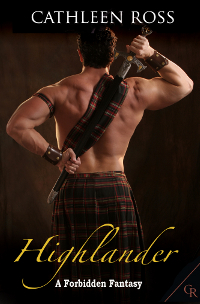