An Excerpt from the medieval romance novel “Highlander” by Cathleen Ross

Lady Isobel McLaird spun on her heels at the thunderous noise of metal and hooves approaching the marketplace. Her maid, peasants and livestock scattered as the phalanx of knights drew to a halt, but Isobel stood her ground. At their head was Sir James Bruce, the man who’d once held her and made her yearn for his caresses.

Now she hated him.

With her heart in her throat, she gathered her skirts to confront him. “Murderer!” she shouted.

Sir James’s enormous black steed reared at the sound of her sharp cry. Hooves flailed near her head as the fearsome knight fought to keep in his horse in check.

Fear chilled her blood and she stepped back.

After climbing down from his horse and throwing the reins to his page, Sir James took off his helm revealing dark blue eyes, which fixed upon her. “You’re as beautiful and foolish as you were on the riverbank three years ago, Isobel McLaird.”

When he pushed back his chain mail, she saw his raven hair was cropped shoulder length and his lips were as sensual as ever under his noble nose.

Wet from the river, her shift sticking to her skin, he’d held her. She’d turned her lips up to his to be kissed.

“I was foolish not to have reported your trespass on my father’s lands three years ago. You’re a traitor to King John Balliol and my brother’s murderer.”

He strode towards her, his hand on the hilt of his sword.

Fear rooted her feet to the damp earth of the marketplace. Though the rain had passed and the sun shone, for her, everyday was gloomy because of this knight.

“Have you not noticed that you’ve not an army to defend you now?” A half smile formed on his lips.

“You jest about my people’s destruction, brave men all, led by my brother. Your cruelty does you no merit, Sir.” Tears pricked the corners of her eyes. David and his men would have gone down fighting the stronger Bruce army until the end, determined to give everything for the cause of John Balliol, the true king.

At her accusation, the smile slipped from his face and his eyes held sympathy. “It is a bad day for Scotland when Scotsmen spill the blood of their own. I’ve news for you, my lady, but it comes at a cost. Your brother lives.”

“What?” For a moment, Isobel thought the ground had shifted under her feet. Owen, David’s best friend had seen her brother killed by this knight’s very hand.

“Nay, my lady. I do not jest about a cause so dear to your heart. Take this proof of my words.” He took a piece of parchment from his page and handed it to her.

A buzz of voices swarmed as the villagers gathered around her but Isobel paid them no heed. With trembling fingers she saw the parchment contained her brother’s fine hand.

Her gaze flicked up to meet Sir James’s. “David says the Bruce will no accept ransom.”

“Aye, my cousin, the king will brook no opposition to his claim and your brother is a formidable knight. I warrant my cousin will keep him prisoner. And now I’ll take my price for giving the message.”

Isobel reached for the purse that hung at her waist.

Sir James stepped forward, wrapped his arms around her and lifted her off the ground. “Would that I had done this those three years ago by the river. I can’t get you out of my mind.”

She opened her lips to protest, but he planted his mouth hard on hers. Surprise, hotly followed by indignation rose within her. She slapped her hands on his chest and kicked with her feet, but her toes met body armor. A sharp pain zinged through her foot and she opened her lips further to cry out. The knight taking full advantage, put his lips to hers, moving them in a rhythm. His action was bold.  Her blood pumped wildly and sensations she had no name for, rushed through her.

Though she dug her nails into his clothing, the mail he wore under his surcoat resisted her damage. Soon though, her hands stilled as sparks of pleasure shot through her. A sigh left her lips, soft with need.

The knight, perhaps sensing her acquiescence, touched her tongue with his. Isobel jerked back, but he followed the movement of her head, refusing to break his kiss. The impropriety shocked her to the core and yet the repeated gliding sensation of his tongue sent tingles down her spine and the feel of his hot lips on hers drugged her to his wishes.

Pinned to his body by his powerful arms, she was helpless, lost as excitement raced throughout her that was better than riding her horse unbridled and wild.

One of his hands slid under her veil and fisted her hair. The sharp pull of it along with his lips, hot and sensuous, demanded more from her. Seized with an unquenchable fire, she let go, closed her eyes, lost in the new sensations.

Tentatively, she followed the movement of his tongue taking pleasure in the most intimate sensation she’d ever savored. He tasted of ale and virile male.

She’d never experienced anything like this. No man had ever kissed her. His face, though shaven, was still in need of a razor. The barbs on his jaw grazed her cheek and though the soft skin surrounding her lips chaffed, the sensation sent heady bubbles through her blood as if she had sipped on too much of her father’s wine.

“My lady!” her maid screamed.

Aware of her maid’s high-pitched voice and the hum of the villagers witnessing this improper act, Isobel twisted and turned though she thought her hair would rip from her scalp.

When he released her hair, she pushed back on his chest with the flat of her hands, aware of his glittering eyes. He did as she asked however, slowly lowering her, but after he placed her on her feet, she noticed his chest rose and fell. The skin on his neck had darkened with blood and she sensed he barely held himself in check.

“What manner of payment is this?” she asked.

“I have no use for your coin, Isobel, but this,” he touched his finger to her lips, “is worth more than any gold.”

You can purchase Highlander by Cathleen Ross using the links below: 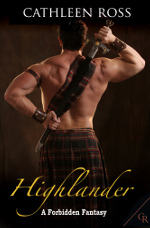 Back to Top
Back to Home