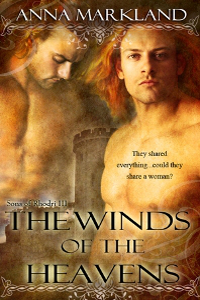 The Winds of the Heavens by Anna Markland

Book 3 of the Sons of Rhodri series.

“THE WINDS OF THE HEAVENS is gem of a novella in a treasure chest of Anna Markland’s stunning medieval tales. Markland combines impeccable research with a rich and lyrical writing style that makes her stories a pleasure to read over and over again.”
– Gerri Russel-author

Set in medieval Wales, Rhun and Rhydderch, a pair of red-headed warriors, find themselves attracted to the same woman. Glain is a healer they’ve sought out in order to save the lives of their brother and brother-in-law. For the first time ever, the twins are at odds over the undeniable attraction they feel for the bonesetter. As the healer cares for their brothers, the twins find themselves competing for Glain’s favor.

They’d always shared everything. Could they share a woman?

“Full of wonderful details of the period that bring the story to life, and with a cast of likeable characters, this is a delightful short romance. At times fun, at times sad, but ultimately satisfying.”
– Silvarie – reviewer

Free Preview of The Winds Of The Heavens

The arduous rescue took most of the day. Night fell as the exhausted men coaxed their weary horses into the village of Llanfarran.

Rhun turned to Rhydderch. His own fatigue was etched on his twin’s face. “What a relief! I worried we’d never get here after pulling them out of the crevice. I can’t wait to hear the story of how they fell in there in the first place.”

His brother raked his free hand through his hair. “The mishap might have ended in both their deaths. As it is, our brother’s leg is badly broken and our brother-by-marriage hasn’t wakened from his stupor.”

One of Rhun’s bowmen, part of the infantry escort, glanced up at his lord. “Good thing the ledge broke their fall, yr Arglwydd. The conveyance of tree limbs lashed together to hoist the Earl up was what saved him.”

Rhydderch smiled wearily. “Maybe, Rhun, but your strong arms got Rhys out.”

Rhys was tall and well-muscled, the gorge steep and narrow. It had taken every ounce of strength and endurance Rhun possessed to haul his helpless brother to safety on his back. The rope binding Rhys to him had cut deep into his skin, and the burns on his hands stung like the devil. Every muscle in his body ached. But they had saved two lives precious to their family. The thought of telling his dear sister, Carys, that her husband, Baudoin was dead could not be borne.

Dylan shook his head. “It was a disastrous end to an expedition cursed from the start.”

Rhun had to agree. The venture to gather information for road improvements in Wales had encountered a discouraging number of catastrophes, including the loss of several horses and the deaths of too many good men. Resumption would have to wait until next spring.

A rider had been sent ahead to warn of their urgent need for a bonesetter. Rhys could not travel far with his mangled leg. Curious villagers recognized and welcomed them warmly as the famous Welsh rebel patriots they were.

Rhydderch shrugged and a wry smile curved his mouth. “This cursed hair gives us away!”

Rhun shared the humor. “How many other redheaded twin warriors do you know?”

Men-at-arms had borne Baudoin’s bier on their shoulders. Rhys had been tied behind Rhun. Rhydderch rode at their side, his hand planted on Rhys’s back.

They reined to a halt and Rhydderch jumped from his horse to assist in supporting their injured brother. “It’s fortunate you gave Rhys one of mother’s potions. He’s completely out.”

Rhun felt his brother’s weight slumped against his back. “This won’t be the last time we’ll be glad we are the sons of a famous healer, and that we paid attention when she instructed us.”

Rhys was taken from the horse and carried to the bonesetter’s cottage. They had expected a man. A young woman awaited them. They exchanged a glance of surprise at the discovery of a slender maiden with ice blue eyes and hair the colour of the harvest moon hidden away in this remote village. Her unusual gown captured Rhun’s attention. Light and flimsy, yet tantalizingly opaque, its sleeves came only to the elbows.

“Lay him here.” The woman indicated the raised pallet in the centre of the cozy cottage. Her sultry voice swept over Rhun like a hot summer wind, and he and Rhydderch complied eagerly. Rhun became aroused at the glimpse of bare female arms as the bonesetter examined the injury. A furtive glance at Rhydderch showed the same reaction!

Each man coughed and turned his attention elsewhere. This was not the first time they had both been aroused by a beautiful woman, but for some reason Rhun was irked now. To ease his discomfort, he embarked on an explanation of the accident and the potion given to Rhys.

She gazed at them. “You’re Rhun and Rhydderch ap Rhodri, the sons of Rhonwen, the renowned healer, and brothers to the Prioress? I have long wished I could meet your mother. The skills she passed on to you probably saved this man’s life. I am Glain verch Llewelyn ap Aldwyn, setter of broken bones.”

Rhun’s eyes widened. She was the embodiment of her name—a jewel.

You can buy The Winds Of The Heavens at any of the online bookstores listed below.

“The center of the story is a set of twins, who in modern times would be the Matthew McConaughey/David Beckham types that would bring a room to a screeching halt when they enter.”
– Regina Griffin-author 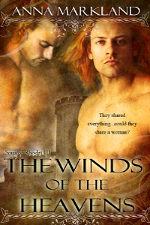