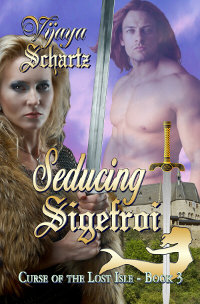 Luxembourg – 963 AD – To offset the curse that makes her a serpent from the waist down one day each month, Melusine, exiled Princess of Strathclyde, must seduce and wed a mortal knight, the shrewd and ambitious Sigefroi of Ardennes.

Sigefroi, son of the Duke of Lorraine, suspects Melusine is not what she appears, but her beauty, her rich dowry, and her sharp political skills serve his ambitions. He never expected her to soften his stone-cold warrior heart.

So close to the Imperial court, dangers and intrigue threaten Melusine. War looms on the horizon, a Mermaid was sighted around Luxembourg, and Sigefroi’s bishop brother questions her ancestry. If anyone ever suspects Melusine’s true nature, she will burn at the stake…

Read an Except from: SEDUCING SIGEFROI

“Is everything to your liking so far?”

Jarred by the deep male voice, Melusine snapped awake. Sigefroi stood in front of her, one soft boot nonchalantly propped on the edge of the wooden tub. The white of his tunic matched his teeth as he stared at her with a wolfish grin.

Melusine glanced around in panic for something to cover her nudity but her clothes lay too far away. She pulled up her legs in the bath water and laced her arms around her knees. “How dare you intrude? Can’t you see I’m taking a bath?”

Sigefroi’s bold gaze swept over her exposed body. “It’s not as if it were the first time. You seem to like bathing in hot tubs as well as in cold rivers.”

Shocked at his effrontery, Melusine released one arm to point toward the door. “Get out of my chamber immediately!”

“Your chamber?” His grin widened. “This is the only private chamber in the villa, and it happens to be mine.”

“Yours?” Melusine flushed in confusion. She knew the villa was small but hadn’t really thought about all the details.

“I’ll share it with you, unless you want to sleep on the hall floor with the servants.” The scowl on his brow returned. “And as the lord of this place, I don’t take orders from my guests… or my wenches.”

Wench? Her solitary life hadn’t prepared Melusine for such vulgarity. According to what she understood of men, however, she must not give herself too fast but rather let Sigefroi grow hungry for her body as long as possible. “I am no wench and demand to be treated with respect!”

He chuckled and effected a mock bow. “You certainly have mine, my lady.”

Melusine managed a forced smile. “If you give me your word to behave honorably, I could sleep on a pallet behind a screen at the far side of your bedchamber.”

He rolled his eyes. “Truly?”

Melusine hoped her inaccessible proximity would work in her favor. “There is enough space for the two of us.”

“Nay.” The candles flickered in his amber eyes. “You don’t understand, my lady.” A slow smile spread on his sensual lips. “I intend to take you to my bed tonight. After all, we are to be wed.”

“So soon?” Panic choked her voice. Impaired by Sigefroi’s close proximity, Melusine couldn’t think. He wanted to consummate their union tonight? She quickly regained her composure. “My lord, it’s not proper. We hardly know each other and are not yet betrothed.”

He pulled up the sleeves of his tunic. “A detail easily remedied, my lady. Do you mind if I wash my hands before dinner?”

Before she could react, he dipped his hands in her bath, caressed her knee, brushed the skin of her thigh. Delicious heat coursed through her entire body. He seemed to enjoy her confusion as he swept the length of her folded arms with the back of one finger.

Lifting her chin with the crook of one finger, he bent and softly kissed her lips.

Melusine melted into the bath water, waves of heat swelled and washed over her. His smooth, soft lips teased hers. Her mouth relaxed and opened under his. She let him gently probe her mouth then claim it as his own. Dear Goddess, she was lost.

How could she manipulate this man when she yielded under his touch? She had seen shameless wenches offer themselves to strangers when it served their purpose, or even withhold their favors at will, but Melusine could never do that. She could not refuse this man. She was exposed, vulnerable, and in great danger.

You can buy Seducing Sigefroi at the online bookstores listed below. 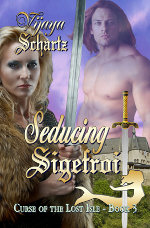