Bound By His Kiss – Catherine Kean 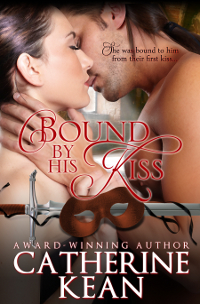 Bound By His Kiss by Catherine Kean

On her way to visit Lord Bramwell Hawksley days before they will marry, Lady Miranda de Vornay is taken captive by forest outlaws. Held hostage by their leader, she fights her shocking desire for the bold, handsome rogue she should despise—especially when he insists he is Bram, and that her betrothed is his corrupt half brother.

Uncertain what to believe, Miranda must find out the truth. She will love only one man: the lord to whom she’s bound by his long-ago kiss.

Free Preview of Bound By His Kiss

“Something is amiss.” Lady Miranda de Vornay’s grip tightened on her mare’s reins as she glanced into the forest that crowded the narrow dirt road she traveled.

The ten armed riders escorting her closed their formation.

“’Twill be all right, milady,” said the grizzled knight beside her, his voice carrying over the clop of hoof beats. “We will soon be through these woods.”

His words were clearly meant to comfort her. His hand, though, had settled on the hilt of his sheathed sword.

How she’d looked forward to riding to Dreyswell Castle, home of her future husband, Lord Bramwell Hawksley, on this glorious spring day. ’Twas her last visit as an unwed maiden. They’d be married on the church portico in three days’ time.

For countless nights, she’d dreamed of him, the squire she’d kissed at her father’s keep three years ago while visiting her family. When she’d returned to her uncle’s castle, where she was being fostered, she’d lost contact with Bram—until last month. He’d returned from fighting on crusade with King Richard to claim his inheritance, which included Dreyswell Castle.

Joy had glowed inside her to see Bram again. Somehow, he’d seemed different than she remembered, but he would have changed. He’d become a knight, a man, while she’d grown to womanhood. Once they became reacquainted, especially as husband and wife, they’d enjoy again the fiery passion they’d once shared.

Today, as she’d ridden into the forest that was part of Bram’s estate, she’d thought back upon the day they’d become betrothed, and their thrilling kiss years ago. Her excitement had quickly turned to unease.

Glancing again into the woods, she said, “I sense we are being watched.”

“Outlaws.” The knight beside her scowled.

Miranda pressed her hand to her throat, over the costly brooch fastening her navy wool cloak.

“Do not be frightened. These woods harbor men who hold no loyalty to King Richard or those governing for him while he is on crusade, but you are safe with us.”

The knot of unease inside Miranda grew. The sensation of being intensely studied, as though someone scrutinized her from her braided hair coiled about her head to the toes of her embroidered shoes, made her palms dampen on her reins.

Her father’s men were well trained in case of an attack. She’d keep her head held high and her gaze fixed straight ahead. She’d think about finally kissing Bram on the mouth again, on their wedding night, as they pulled off each other’s clothes, kisses greedy and—

With a sharp hiss, an arrow streaked past her left shoulder. She jumped with a shriek as the arrow embedded in a tree behind her.

“Draw weapons!” the knight beside her yelled. More arrows whistled through the air. Shouts broke out among the men-at-arms, along with the rasps of swords being drawn and the whinnies of horses.

Heart hammering, Miranda reached for the dagger concealed within her cloak. She’d never used it before, but at least she had some way to defend herself.

“Protect the lady,” a man-at-arms ordered from up ahead.

As the riders moved to encircle her, scores of armed outlaws ran out of the undergrowth, some wearing leather hoods with eye slits, others wearing masks that concealed the top half of their faces. More arrows flew. Swords clashed. A knight screamed in agony.

The outlaws were closing in.

As Miranda struggled to control her spooked horse, a tall, broad-shouldered man with a drawn sword strode out of the forest. He looked straight at her, his eyes blazing through the openings in his mask. His unflinching stare and purposeful strides toward her implied he meant to . . . take her.

Terror raced through her, chased by a shocking tingle of excitement. Somehow, he seemed vaguely familiar. A wisp of indistinct memory brushed her fear. How could she know an outlaw? She couldn’t. Her senses were tricking her.

Seeing a gap in the throng of fighting men, Miranda gestured to her knight who was battling several outlaws. “There!” she cried.

“Go!” the knight yelled. “I will be right behind you.”

With a kick of her heels, Miranda spurred her mount forward.

“Not this day, milady,” a rough voice growled. She shivered as her gaze locked with that of the man who’d spoken: the tall rogue, claiming the last yards between them.

She urged her horse onward again, but outlaws swarmed in upon her, grabbing for the reins and pulling the wild-eyed animal to a halt. The rogue she’d seen earlier approached.

Miranda cast a frantic glance at her escort. Surrounded, they were being forced to relinquish their weapons.

Her breaths harsh, she brandished her dagger. “Stay back,” she shouted to the thugs surrounding her.

Laughter rippled through the outlaws. The rogue reached her side and looked up at her. His mouth, not hidden by the mask, tilted into a wry grin. “Give me the dagger.”

“Step away.” How proud she was of her fierceness. “I warn you—”

“And I warn you. If you wish your men to remain alive, you will sheath your knife and hand it to me. Then, you will dismount. I will not repeat my demands.”

As Miranda stared down at him, anger burned within her, along with a sense of helplessness.

The rogue extended a hand, a silent demand for the knife. Her movements stiff, Miranda removed the leather sheath from her cloak, shoved in the knife, and handed it down to him, shuddering at the brush of his callused fingers against hers.

The roughness of his hands bespoke a man used to fighting. He might be a mercenary. Oh, mercy, what did he want with her?

He secured the knife in his belt and raised both arms, an offer to help her down. A ridiculous show of chivalry. She’d never accept the help of an outlaw rogue!

Ignoring him, Miranda slid down from her horse and smoothed her garments into place. His height forced her to raise her chin to meet his stare. This close, she saw shiny, dark brown hair escaped from the edge of his mask, the strands the same color as the stubble darkening his jaw. His eyes were brown, too, his stare bold and possessive, and she fought the urge to cower.

“Why did you attack us?” she asked, focusing her anger into her biting tone.

The rogue’s smile broadened, revealing a strong, even set of teeth.

“What is it that you want?” she demanded.

His hand lifted to capture a strand of hair escaping from her braid. “What I want, milady, is you.”

You can purchase Bound By His Kiss at any of the bookstores listed below: 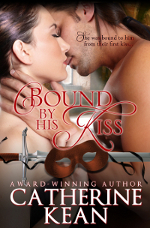