The Sword and the Sylph by Elizabeth Rose (Elemental Series – Book 3: Air) 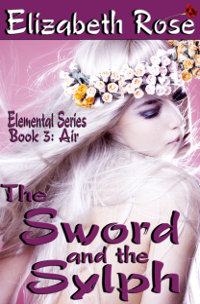 The Sword and the Sylph by Elizabeth Rose

The Sword and the Sylph
Elemental Series
Book 3: Air

Sir Braden is headed to Banesmoor to hire out his sword. But when he gets there he is promised the lord’s daughter in marriage as well as a huge dowry if he can but capture the spy within the castle’s walls.

Portia-Maer is an elemental of the air, called a sylph. She can brew up a storm with the mere flick of her wrist. She is half fae and half human, and has been sent to Banesmoor by her wretched stepmother to spy, as a battle is in the planning. Since one of Portia’s powers is the ability to turn invisible, she has no problem carrying out this task.

But when she is distracted by the landless knight who has just been promised a marriage as well as a title and lands he doesn’t deserve, she drops her guard and he discovers her presence. And to her surprise, the man says he knows her and that she has healed him with just a kiss.

Can Sir Braden keep his commitment to not only marry a woman he doesn’t love but also expose the girl of his dreams as the spy who is about to bring two castles into battle? Or will Portia be able to convince him that there is so much more to her than meets the eye?

Passion and power collide as two sides meet in a deadly battle. And when dark secrets from the past are exposed, lives are not only threatened, but changed forever in The Sword and the Sylph.

Free Preview of The Sword and the Sylph

Portia watched from the shadows of the great hall in her invisible form. She’d have much to report back to the Countess Odillia now. And if she was to make it back up the mountain in time to warn them of the attack, she had to leave anon.

She watched Sir Braden as he walked right past her, slowing down slightly, and if she wasn’t mistaken, sniffing the air and glancing from the corner of his eyes in her direction. Then he disappeared down the hall and was followed by Lord Solomon, the captain of the guard, and Lady Christabel as well.

She surveyed the lady of the castle as the woman glided past her down the corridor. She couldn’t stop thinking of the way Sir Braden had dropped to his knee and kissed her hand. He was so gallant and chivalrous and she would have welcomed the kind gesture. Instead, this woman all but shunned him. She didn’t deserve the likes of Sir Braden. She didn’t deserve anyone for that matter.

She hurried out to the courtyard and snuck through the gate, heading to where she’d left her horse tied to a tree hidden in the forest. When she was sure no one was looking, she materialized and put her foot in the stirrup to climb atop her steed. A strong arm on her shoulder and a low voice from behind her made her stop in mid-motion.

“I thought I’d find you here. Now tell me, Portia-Maer, just what is it you think you’re doing?”

She turned to look directly into the blue eyes of Sir Braden. But this time his eyes were not dancing with excitement. Now they were clouded over and disappointment shadowed them as well.

“I demand you release me at once.”

“I cannot do that, my little fae one. As a matter of fact, I’m going to have to take you back to Lord Solomon.”

“How do you know I’m of fae blood? And why would you do such a thing as to take me to a man who would not think twice of hanging me at the crossroads to die as an example to others?”

“Oh, so it seems someone has overheard our private conversation. And you have just confirmed my suspicions that you are the spy that’s been giving information to the Earl of Calila as well.”

“The earl in my father,” she told him. “I would do anything at all to help him, even if it meant my death.”

“Your father?” His hand loosened his grip on her shoulder and he slowly brought it back to his waist. “You mean to tell me you live at Castle Calila? ’Tis your family that is fighting Lord Solomon and his men?”

“’Tis not that way, not really. Now tell me, how did you know I was here if you could not see me?”

“Your scent of lilacs gives you away every time, sweetheart. And I’d venture to guess that one of your fae powers is turning invisible is it not?”

“You’ve already seen the proof of that, so why do you need to ask?”

“What else can you do? And are you called a dryad like your friend Rae-Nyst? She can command the vines and trees to do her bidding. Can you do that as well?” He looked around cautiously, hand on his sword, as if he thought the vines of the forest were about to attack him.

“I see. A sylph. Interesting title I must say.” He nodded his head and swept his eyes over her from head to toe. She felt suddenly very insecure and lowered her gaze to the ground under his wanton perusal.

Braden drank in the beauty of the girl who’d just called herself a sylph. Such an odd title for an odd girl. But naught about her was common. Her hair was like spun cornsilk, long and flowing, lifting around her in the breeze. It was such a light honeyed color that it almost seemed to him as if it were silver. Her lips were full and pink, her eyes dark blue like mountain bilberries. And her skin looked soft and smooth, and so pale that the noblewomen would envy her for the appearance that they strived so hard to attain.

She wore a thin silken gown of white and light blue with tight fitting sleeves and long flowing tippets hanging down from her elbows. And around her head was a woven wreath of small dainty flowers of yellow and white making her look like a Queen of the Fae people. She smelled liked the fresh air after a spring rain mixed with the scent of lilacs that clung to her wherever she went. She said she was an elemental of the air, and to him that described her well. She was light and airy, breezy and fresh. Her essence called out to him whether she knew it or not, making him feel more alive than he’d felt in years.

“Now, let me go,” she said. Her clear, deep blue eyes begged though her words were calculated and cool. How could anyone be frightened of such a gentle girl? She looked as if she needed a strong man to protect her, and he couldn’t believe she’d do anyone harm.

“I would make a deal with you,” he said instead. “You get me into Castle Calila without anyone knowing why I’m there, and I won’t expose you to Lord Solomon as the spy he’s been trying to hunt down and kill.”

“But you mean to be a part of attacking my father’s castle,” she protested.

“Same as you meaning to be a part of attacking Banesmoor. So the way I see it, we are even.”

“And I cannot allow you to give information that would seal the doomed fate of Lord Solomon and his people either.”

“Then I have no choice but to bring you to before the lord of Banesmoor.”

He reached out for her but once again she disappeared from his sight. He groped at the air, but couldn’t find her. Then he saw her horse turn and ride off quickly, and he rushed to his own steed to follow.

“Sir Braden,” called out Sir Samuel, riding up to join him. “I saw you groping at mid-air in an odd fashion.” He cocked his head and studied him as if he thought he were addled. “What were you doing, if I may ask?”

“I am following someone,” he said, mounting his horse.

Sir Samuel looked in the distance at the lone horse riding away and then back to him. “You are chasing a horse without a rider?” he asked. “I hardly think Lord Solomon would find that courageous. Mayhap he was wrong in choosing you to marry his daughter after all. I am not sure you would be able to protect her as promised.”

Braden watched the horse disappear in the distance and knew he couldn’t follow without looking like a fool. He’d pledged his fealty to Lord Solomon now, as well as accepted the betrothal of his daughter. As a knight of his word, he would follow through with what he’d started.

“If you would be kind enough to tell Lord Solomon I would not be joining him back at the castle, I’d appreciate it.”

“Another horse to chase?” the man asked with a smile.

“Nay. A spy to catch,” he answered, taking off in the direction of Mount Calila to do the job that was now expected of him.

You can buy The Sword and the Sylph at any of the online bookstores listed below.