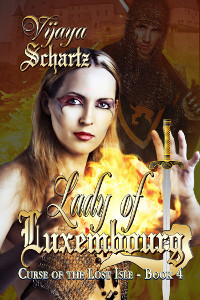 Lady of Luxembourg by Vijaya Schartz

978 AD Melusine the Fae, immortal and cursed Lady of Luxembourg, managed to hide her Pagan nature from mortals for many years. She fiercely protects her handsome Count, Sigefroi, but in their princely bliss, neither of them seems to age, and a few suspicious bishops take notice. Then an ondine wreaks havoc during a battle, luring enemy soldiers into the river.

Betrayed, Sigefroi reflects on his many sins from the depths of a rat infested dungeon. Under torture, will he reveal her deadly secret? And when her beloved turns into a devout Christian, can Melusine salvage her happiness? Can love truly redeem her curse, or will she burn at the stake?

This gritty, edgy, realistic medieval romantic series is not for the faint of heart. If you like realism in your medieval novels, this series is for you. Reviewers gave it five stars and called it “bloody and bloodthirsty in places.” So, beware!

There is also a special edition including the first three books in the Curse of the Lost Isle in one kindle download, for a bargain price.

You can buy Lady of Luxembourg at the online bookstores listed below.