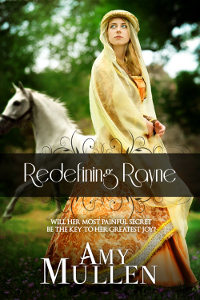 “Once you start reading you find yourself getting caught up into the storyline and falling in love with the main characters.”
– Amazon review by Cindymcc

Rayne de Latham, cousin to King William Rufus, should be enjoying a life of privilege. Instead, she has only known misery. Her disastrous first marriage yielded nothing but pain, suffering, and three stillborn children. She believes she is cursed and is certain another pregnancy will end in another tragedy. When the king seeks to get rid of her by sending her to marry one of his knights, she will do just about anything to get out of her betrothal.

Widower Andre de Grelle is father to two small boys who came to him by marriage. When his first wife jumps off the castle walls in a fit of madness, he keeps the boys he has grown to love as his own. When king sends him a new bride, the lovely but troubled Rayne, he vows to have more patience with her than he had with his first wife.

Once Rayne arrives at Cuxton Castle, Andre realizes there is much more to her than meets the eye. She does everything she can to force him to send her away, but nothing works. Frustration grows as Andre discovers his betrothed is hiding something from him about her past, something so devastating she cannot speak the words out loud.

In the midst of a siege on nearby Pevensey Castle, a truth comes to light that changes everything. As the real story of Rayne’s past emerges, lives change forever. Will love be enough, or will it be easier to walk away?

With a tremulous lift of her chin, Lady Rayne made eye contact with the king. William Rufus sat before her, looking bored, as he finished uttering the words that would change her life forever.

“I wish to be left alone,” she said as she jerked her head aside to avoid his eyes, her voice barely audible. “I have done my part for the betterment of our lands. I married once and lost everything.”

William eyed her thoughtfully as he waved away those standing near him with a flick of his wrist. “I see we have a problem then, cousin. Your husband is gone. Because you have no other family, you become my ward. You have no say in what you do, and I do not ask much of you.”

Rayne’s eyes widened as she lowered her head. Upsetting the king was not in her best interests. She gazed momentarily at the shimmering fabric of her skirt, a reflection created by the sun coming through the window. Fear and loneliness welled up inside her.

“And furthermore,” William said before she could speak again, “I am hereby taking control of your estate. Once you marry, the manor will go to de Grelle to do with as he pleases. I will retain the hunting grounds.”

Rayne’s head shot up. “But sire, there are better choices for marriage, I am sure. I am twenty. This de Grelle would rather have a young wife, do you not agree?” She was terrified, and she risked much by arguing with him, but she was fighting for her life.

“You’ll have a three-month betrothal. That is plenty of time to get used to the change. You will travel to Cuxton at once,” he said, sounding bored again.

“There is nothing more you can say, milady. You’ll honor your betrothal. I have more important things on my mind than listening to your complaints. They are plotting against me, and I must know how to handle the situation. I will not tolerate this nonsense. These ungrateful heathens do not want to show me the same respect they showed my father, wishing instead Robert, Duke of Normandy, was king of England. Andre de Grelle has proven himself loyal to me in the past. Unless his loyalties have changed, you will be safe with him.”

Rayne’s stomach rolled as the king ranted. There had never been a choice. Just a week earlier she had requested he send her to a convent so she might live her life out in peace. He had loftier ideas, apparently. She would never be free. The king’s face was reddening as his anger grew, and she knew she had pushed him too far.

“I will show them all!” his voice boomed throughout the hall as his eyes narrowed, and he clenched his fists in his lap. “Those who plot to destroy me shall pay dearly! You will go to him, and your marriage shall ensure his continuing loyalties. He has asked for a wife, and to make sure he remains loyal to me, you will become that wife. Am I clear, Lady Rayne?”

“Yes, sire,” Rayne said, her shoulders drooping in resignation. “I shall be ready to go as soon as you wish.”

“Ah, very good,” William spoke in a lower voice. “I see there is sense in you after all. Be ready on the morrow. You shall be accompanied by Tillie. She will act as your chaperone until you are wed. Lord Andre de Grelle has already been informed of your betrothal and is expecting you. Remember, you have three months. Make the most of your time and accept your place. This marriage is a perfect match in ways you could not understand, Rayne.”

Rayne let out a long breath, low enough so the king could not hear her, and moved slowly to leave the near-empty hall. Only a few of the king’s men witnessed their meeting, though they barely took notice of her presence. Anger flared, but it was quickly subdued by her hopelessness.

Stopping, she faced him again.

“Your eyes betray you. I understand you think your last husband was unmerciful, but you could do worse than Andre de Grelle. Do not dishonor yourself. You are the humble wife-to-be of a Norman lord. Act as such. Do not doubt I have eyes in Cuxton

Castle, cousin. You will find, with time, how wise and merciful I really am. You will thank me, Lady Rayne. Am I clear?”

Without hesitation, Rayne fled the hall, ignoring the curious eyes that watched her flight as she returned to her modest manor for the last time.

Hours later, Rayne sat in a stiff, high-backed chair in her bedchamber. Her tired eyes drooped, but her mind was too busy to allow her to sleep. She had once shared this room with her husband, Claude, a man who was none too kind. His death had been a relief. He had taken off during a violent storm, when a tree, caught up in the high winds, fell taking him to the ground and to his death. Rayne did not miss his cruelty, nor did she mourn the loss of her married life.

Her babes, however, still caused her great misery. Six years ago, the first was born and lived only minutes. The second, born a year later, suffered the same fate, and then a third a year after.

Following a long, painful labor, her first had died in her arms, but the second and third were whisked away to spare her pain. She had been violently ill after giving birth with the last two, and could not hold them, help them, or save them. They both died quickly, each buried before she could rise from her sick bed.

Her greatest fear was another birth would end the same way. Never again could she feel pain so intense. Unimaginable. Indescribable. Soul-crushing. She would surely die with the next. Another pregnancy was out of the question.

Thinking about it was painful. She only spoke of it with Tillie. Otherwise, she avoided speaking of it as doing so brought back the memories she had locked away. It was far easier avoid it.

With a sigh, she stood, wishing she had put her hair up, as she normally did. It was tangled now, and she would have to take more time to ready in the morning. Her attire was wilted, but that did not matter. She had worn her nicest kirtle to see the king and had no further use for it.

How she appeared to Andre de Grelle mattered not to her. She had endured one boorish husband and did not wish to impress another. Maybe he would send her away. If he was important enough to the king, maybe he would have a say in his bride. He asked for one, but what if he was not pleased? What would such a man want with an aging widow of twenty years?

Rayne did not fear another beating. Those moments had been the easy part of her existence. The pain dissolved, the bruises faded, and she would wake up to a new day. Claude had told her it was simply what happened when a woman disobeyed her husband. There was no joy in her marriage, but losing her children was what had killed her soul. If she had to choose, she would opt for ten new bruises a day rather than suffering through the loss of another baby.

A plan formed in her mind, building upon itself at a pace so quick she struggled to follow her thoughts. The king would not relent. William Rufus was not a kind man and he cared only for his wealth and securing more power. England, the country his father had fought so hard to secure, was now at odds with its king, who ruled so unlike his father. She dared not defy him openly, but what if de Grelle refused her? What if she should appear ragged and homely? Many had called her beautiful. If she could appear otherwise, maybe he would refuse her, and her part would be done.

She crossed the room to look through her clothing, feeling a bit excited with her plan. Inside her grew a hope that all was not lost. Her chest was packed full, as the servants she still had must have been ordered to pack for her journey. Picking up one item after another, she threw the nicer items onto the floor, leaving her with the oldest and more worn pieces she possessed. Then, almost as an afterthought, she packed away some items she did not want to leave behind. Forgotten relics from her childhood and the only happiness she had ever known.

Within moments, her plan formed completely. She would leave her hair down, wild and tangled, and smear her face with ash. He would send her back, and she could be free. She could not openly defy the king, but if Andre rejected her, mayhap she would be free. Aye, she would go, but could not be faulted for being sent back. The king could not be that cruel, could he?

You can buy Redefining Rayne at any of the online bookstores listed below. 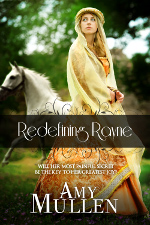