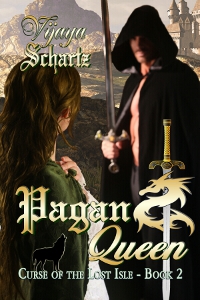 810 AD – Alba (Ancient Scotland) – Queen at last, Pressine brings victory to her beloved Elinas and prosperity to their growing kingdom. But she has to contend with the intrigues of Charlemagne’s bishops, spurred by her Christian stepson. While Elinas, on the battlefield, remains unaware of his son’s machinations, Pressine fends off repeated assaults against her life. She also fears the curse that could bring her downfall. For the love of Elinas, she will tempt fate and become with child. But when her indomitable passion challenges the wrath of the Goddess Herself… can she win that battle?

Read an EXCERPT from Pagan Queen:

“You almost died. And our son might have lived if you had not disobeyed.” Elinas slapped Caliburn’s scabbard against his leather trews.

Pressine had not seen him so upset since the first day he’d barged into these very rooms, after she had cleaned and rearranged them, erasing all traces of his departed queen. Even the roaring fire in the hearth did not dispel the chill.

“I did not think the child would suffer. At the time, I had to save the villagers.” Still, the guilt weighed heavily on Pressine’s chest, robbing her of the will to defend herself.

“Endangering your life and his, to confront a pack of hungry beasts… alone?” Jaw twitching, Elinas locked his hands behind the back of his purple coat and paced like a caged wolf, eyes ablaze with simmering fury.

“I had the power to stop the carnage. No one else could.” Heart racing, Pressine smoothed her blue dress, trying to sound convincing. “In my vision the wolves slaughtered many women and children. It was my duty to help.”

Elinas rolled his eyes toward the wide beams holding the ceiling. “Do not talk to me about sacred duty!”

Walking the length of the table, he ignored the untouched breakfast of pea flour bread, boiled duck eggs, and fresh goat cheese. If Elinas infuriated so easily, now would not be the time to tell him that Mattacks had tried to kill her. He would never believe it.

“Maybe you did as you pleased among the Ladies of the Lost Isle…” Elinas turned fiery eyes on Pressine. “But in my castle, I am responsible for your well being. You should never have endangered your life. No duty of yours is worth dying for.”

Pressine’s chest tightened at the harsh tone. Where had all the love and tenderness gone? Was this the same man who had pleasured her all night on this very bed, whispering sweet words in her ear?

“You deliberately endangered your life!” A heavy fist slammed the table.

Pressine jumped along with the breakfast food, the pewter cups, and the ewer of mulled ale. Elinas’ anger hurt so much, she wanted to cry, but she steeled herself against the onslaught.

Although deeply shaken, she managed to keep her voice calm. “I am not just your wife, not just a queen. I am a Priestess of the Lost Isle. I belong to the Great Goddess. I thought you understood, since you have some Fae blood in you.”

“So I am told, but it does not affect my judgment.” Elinas glowered from across the table. His dark stubbled jaw tensed.

Pressine braced herself to weather the storm.

“After three years of marriage, you still remain a mystery to me. What are you really?” The feral eyes narrowed to slits. “How many deadly secrets are you hiding from me? Would you leave me if the Goddess demanded it?”

Pressine remained silent. Would she? Could she?

Elinas paused, as if stunned by the implications of her silence. He turned away and stared at the rug, shoulders tense with raw emotions. “What else are you not telling me? Will all our children be deformed?”

The despair in his voice made Pressine cringe. She struggled to steady the pounding of her heart. “Only male children are at risk. Not all are affected, but yes, there is greater danger of abnormal male children among my kind.”

Elinas exploded into a mirthless laugh. “You choose a fine time to tell me!” The derisive tone sounded threatening. “Do you not know that only boys matter to a king? What if my three sons die early?” He shrugged. “Daughters cannot rule the land. They are only good to marry off to seal alliances.”

Insulted by the remark, Pressine decided to fight back. Leaning for support against a heavy oak chest, she molded her palms around the smooth carvings of the lid. “Women could rule in the old days. Women went to battle. When did we become weak and unable to decide for ourselves? I was not raised to do the bidding of a man. I serve the Goddess and obey the laws that govern the Otherworld.”

“What a perfect excuse!” The sarcastic tone cut into the stifling air like a sharp dagger. “What else?”

Wondering how Elinas would react to more forbidden knowledge in his present state, Pressine hesitated.

He lifted a heavy chair and slammed it down on the flagstone in his rage. “Speak now, woman! Afore I run out of patience and banish you from my sight.”

Elinas’ eyebrows shot up questioningly. “What about it? Pray tell.”

“When Aunt Morgane came to our wedding, you thought you recognized her.” Ignoring the lump in her throat, Pressine paused to watch understanding dawn on her king’s face. “You were right. It was her you met as a lad. She has not aged a day since.”

“Morgane?” Doubt crept into the angry voice. “That was thirty years ago and she barely looks thirty now. How old can she be?”

Elinas no longer seemed angry, but Pressine refrained from smiling at her small victory. “I do not know exactly, but she knew King Arthur, the bear of Britannia. She remembers former lives as well. She claims to have witnessed the Trojan Wars, and she speaks about Hercules and Achilles as if she knew them well.”

“Ridiculous!” Elinas turned away as if to dismiss the idea, then looked out the window. “These are only legends.”

Pressine swallowed hard. “All legends are rooted in reality.”

“Do not mock me, woman.” A calm, threatening tone returned to the king’s voice as he faced her again.

It crossed Pressine’s mind to use her powers of persuasion to influence him, but such coercion would not be fair to the man she loved, or even to herself. She needed to be understood and accepted for what she really was. Harnessing her courage, she pushed herself away from the oak chest and walked toward the table that separated them, keeping her chin up.

“This may sound unbelievable to you now,” she explained softly, “but in the ancient world, immortality was not unheard of.”

You can buy Pagan Queen at the online bookstores listed below.