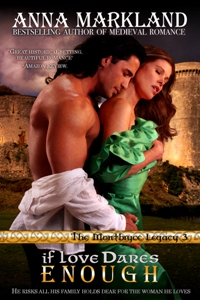 In the aftermath of the Battle of Hastings, Hugh de Montbryce comes to believe that violence arouses him. He avoids women.

But he cannot turn a blind eye to the abuse Devona Melton suffers at the hands of her Norman husband, even at the risk of angering his King.

“Hugh and Antoine de Montbryce are my kind of hero and I was kept enthralled by their adventures and their willingness to risk everything for the women they fell in love with. Hugh has additional appeal because he’s a virgin hero! Not too many of those in historical romances! The book is rich in historical detail. I couldn’t put it down. And those dogs! You’ll fall in love with the Melton family’s mastiffs, Boden and Brigantia.” Roberta – Amazon reviewer

Hugh’s hand trembled violently. He hoped his brother had not noticed, but suspected Antoine was aware the tremor had plagued him since the eve of the Battle of Hastings.

That fateful October night, his elder brother, Rambaud, had sensed his turmoil. “Hugh, there’s no shame in fear. I’m afraid, as is Antoine. Any man who tells you he isn’t afraid of what we might face on the morrow is a liar. The important thing is not to allow the fear to control you. Bravery is born of fear.”

His brother’s advice had both reassured and annoyed him. “Ram, I can’t stop shaking, but I’m not a coward.”

Now, three months later, as he and Antoine rode the frost-rutted route to Domfort, Hugh recalled his outburst the night after the horror of the battle. “Why is it the thing a man feels most compelled to do after courting death is lie with a woman? The survivors in my brigade are hobbling round with tree trunks at their groins.”

His shaking hand had gone to his rigid manhood. “Look at me. I can’t help myself.”

His confession had caused his brothers to shift nervously on their camp stools. The three were gazing into the dying embers of a fire they had hoped would dispel the October chill and warm their hearts after the sickening slaughter. He knew their discomfort was not caused by embarrassment at the uncharacteristic remark from their baby brother, but because they understood.

Into the dark memory of those terrible days, when the future of England and Normandie hung in the balance, Antoine’s voice penetrated. “Let’s hope Ram and Mabelle reached Westminster in ample time for the Coronation of our Duke William as King of the English on Christmas Day.”

When Hugh looked back on events since they had received news in England of the pestilence in Normandie that had scythed down their father, he could scarcely believe how far they had travelled in such a short time.

Within a sennight of receiving the tragic news of their father’s death, they had crossed the Narrow Sea between England and Normandie and were galloping into the courtyard of their family castle at Saint Germain de Montbryce. Then it was on to retrieve Mabelle after discovering she had fled to her father’s castle at Alensonne. Time was of the essence if Ram and Mabelle were to be married in time for them to sail to England to attend the Conqueror’s Coronation.

Hugh glanced at his brother. “They’ll have arrived, if the tides and winds were favorable. After the Coronation, I suppose Ram will have to leave Mabelle in Westminster. He can’t take her to live in Ellesmere Castle, given the dilapidated state it’s in.”

Antoine nodded his agreement. “Oui. Ram didn’t admit it, but I know he was disappointed with the condition of the castle Duke William granted him. Compared with our home in Normandie, it’s a ruin.”

“Nothing more than an earthwork, really,” Hugh added.

Antoine chuckled, his thoughts evidently on the same events. “I’m sure no one has ever been wedded and bedded as speedily as Mabelle!”

“If Ram failed to show up at Westminster, he would probably lose his promised earldom, but he was willing to risk it to bind Mabelle to him,” Hugh replied. “While Ram may not yet realize it, she’s his soul mate.”

In his heart, Hugh doubted he would ever find his soul mate. Indeed he knew he would not because he had resolved never to look. Hastings had changed him forever. The happy-go-lucky Hugh was gone, ground into the blood, muck and gore of Hastings.

Antoine nodded. “I hope our elder brother comes to appreciate Mabelle more. She’s the woman he’ll need as he tries to establish his Earldom in England.”

“Especially in the dangerous Welsh Marches.”

Antoine chattered on, pulling his cloak more tightly around him in the chilly air. “After the sickening brutality of our army’s victorious crossing of the Thames at Wallingford, I was glad of the chance to get away from the never-ending bloodshed and accompany Ram on his journey to inspect Ellesmere Castle. He certainly deserves the earldom granted as a reward for the building of our fleet for the invasion, but he and Mabelle will have their work cut out for them in Ellesmere.”

“But Mabelle is strong. She’s survived on her wits for many years.”

Antoine frowned. “Is that all you can say, Hugh? Oui? What happened to the talkative baby brother I used to know?”

Antoine shook his head and sighed. “Look, mon frère, memories of Hastings are painful for us all. I’ll never be the same. The horror will always be with me, but I will not allow it to ruin my life. We were lucky all three of us survived and we should celebrate that.

“You fought well at Hastings, distinguished yourself in fact, and we were fortunate to serve under Ram’s command, helping the Conqueror take Dover and Canterbury.”

His brother was right and yet Hugh’s dark mood refused to leave him. “I suppose I’m lucky to have survived with a gash on my arm from a Saxon sword. I’ll try not to be so sombre.”

He rubbed his bicep. The wound had healed well, but the muscle ached still.

“Good! I’ve no wish to be talking to myself all the way to Domfort. Ram was concerned about you after Hastings, and I’m beginning to see why. He’s appointed us overseers of Mabelle’s dowry holdings at Domfort and Belisle, so we must live up to his expectations.”

Hugh’s shoulders tensed. “Of course we’ll live up to his expectations. We’re Montbryces, Antoine. I haven’t forgotten that. I won’t let either of them down. You’ll help me get established at Domfort, then ride on to Belisle.”

They rode in silence for a long while before Antoine spoke again. “Hasten the day when Mabelle’s father, Guillaume de Valtesse, no longer holds Alensonne in his manic grip, then we can turn our talents to sorting out that castle as well.”

Hugh sensed Antoine’s discomfort with his silence. “Don’t worry, brother. I’ll be fine. It will just take a while to get over Hastings.”

How to tell Antoine the killing aroused me?

It was certain that Ram had kept a mistress before he met Mabelle, though he had been discreet about Joleyne. Antoine’s reputation with the ladies was legendary. But Hugh had never pursued women, never felt the same rush of need he often felt now. It was dangerous. If violence aroused him, he might kill a woman in the throes of passion.

You can buy If Love Dares Enough at any of the online bookstores listed below. 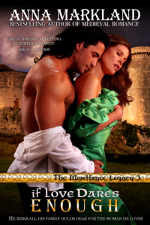