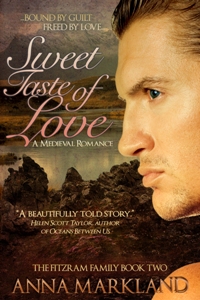 “I’ve read a number of medieval romances by Anna Markland and they are without exception well written. One of her great strengths is the wonderful historical details she weaves into the story that always transport me back to the time period. In this story the heroine Nolana is in trouble as her horrible stepfather is determined to marry her off to an old man who will pay for the privilege. Nolana runs away, but she has no one to run to. Enter Aidan, a nobleman who has dedicated his life to God as penitence for what he believes is his part in the deaths of his beloved parents. But the life of a monk proves to be rather challenging for a man used to the finer things in life. I won’t spoil the story by explaining more. Suffice it to say that both Nolana and Aidan have challenges to overcome and Aidan especially must come to terms with where his duty lies. A beautifully told story as usual. Very enjoyable!”
– Loves Romance

Ragna pinched her lips together. “Your decision is ridiculous, Aidan. I have no intention of entering a nunnery.”

Aidan FitzRam inhaled deeply. Arguing with his sister was never easy. She was used to getting her own way. His sullen-faced younger brother leaned against the wall. Neither sibling was happy with his choice. He pulled the rough cowl away from his neck. “No one expects you to. It is my decision to enter the monastery. It is my fault mother and father died in the White Ship disaster. I must atone.”

Ragna stamped her foot. “But you will chafe at the monastic life.”

Aidan rolled his eyes. “That’s why it’s an atonement. Lindisfarne Abbey is dedicated to St. Aidan. I was meant to live my life on Holy Island.”

His sister threw her hands in the air, then pointed an accusing finger. “Mother would be devastated by this, Aidan. It was not your fault nor mine nor Edwin’s that our parents drowned with Prince William and the flower of English nobility. Don’t you see their deaths gave us a chance to live? Our parents never intended you to be a monk. You’re the heir to Kirkthwaite Manor and Shelfhoc Hall, not to mention the Sussex estates. You must sire sons.”

Aidan chewed his bottom lip. “I am responsible for their deaths. It was I who suggested they take our places. Edwin can have whichever hall he wants. I’ll cede my right to the remaining property in favour of your husband, or Blythe’s husband or their sons.”

Edwin raked his fingers through his hair, then rubbed the back of his neck. He drew a breath, looked at his sister, turned on his heel and left.

Ragna shook her head vigorously as she paced. “I’m not married, nor do I intend to wed. Dieter won’t want either English property. You have no right. You can see how Edwin feels. Godemite!”

Aidan stuffed his hands into the sleeves of his robe, digging his fingers into his forearms. “I have every right, and you shouldn’t blaspheme. It’s not ladylike.”

Aidan sighed. “You can live at Kirkthwaite or Shelfhoc, married or not. I intend to remain here and devote my life to God. Now go!”

A tear trickled down Ragna’s cheek. “You’re four and twenty. You have a lifetime ahead of you. Blythe will never forgive me. I cannot leave you here, Aidan.”

He put his hands on her shoulders and kissed her forehead. “You have no choice.”

She tore away from him and rested her forehead against the stone wall of her brother’s dormitory. “If you will not take up your rightful place for me, then do it for England. Your country needs strong barons now the succession is in jeopardy. You were born to follow in Father’s footsteps.”

Aidan shook his head and held out his arms, wondering what he had eaten earlier to make his belly churn. “Try to understand, Ragna. I must do this. Please leave now. Kiss me before you go. Give me your blessing.”

She whirled around, gritted her teeth and stormed out, slamming the door.

Aidan’s shoulders tightened further. He fell to his knees, praying for fortitude to bear the lonely years ahead. He missed his father’s guidance. Caedmon FitzRam had been the rock of the family. Was Ragna right? Was he avoiding his responsibilities by becoming a religious? Or was the devil tempting him away from his vocation? He had heard the call when he learned the devastating news. He must atone. Their deaths were his fault. He should have died instead.

You can buy Sweet Taste of Love at any of the online bookstores listed below. 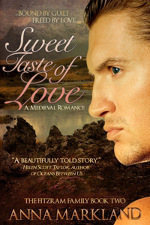