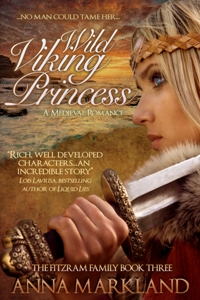 Overview: Ragna’s family nicknamed her the Wild Viking Princess because of her wilful nature, inherited from a Danish grandmother. No man could tame her. Until she met a real Viking.

“5 stars and two thumbs up to “Wild Viking Princess”, the third book in The FitzRam Family series. Rich, well developed characters including Ragna FitzRam, daughter of Caedmon. Anna writes an incredible story weaving plotlines and settings so real you feel as though you could be there. I just loved this book, I think you will too.” — Lois Lavrisa, bestselling author, LIQUID LIES.

“The story line was great. I loved how the author brought the two different customs together and that they could adapt to each other’s ways. Also she kept the passion going between them. I love that about Markland’s books.” — Nancy Burt

“A good interesting read…kept me reading and moved along quickly through the story.” — Karen Heinrichs

A note to my readers—Wild Viking Princess is the third book in the series entitled The FitzRam Family. These stories grew out of The Montbryce Legacy Series. If you have read the Legacy books you will be familiar with many of the characters in this book. If not, you will enjoy meeting them for the first time. This is the story of Ragna FitzRam, daughter of Caedmon and Agneta (A Man of Value), sister to Blythe (Carried Away), and Aidan (Sweet Taste of Love).

The exhausted Danes moored the boat in the hidden cove. Though the storm’s rage had weakened, it had been an ordeal getting back safely. The shivering survivors cowered together in the stern.

The lad lay like a corpse, on his side, in a pool of water in the bottom of the boat. The shivering dog had curled up next to him. The animal growled when Reider leaned over to listen for signs of life.

Ja! The courageous urchin was still breathing, barely. Reider scooped him up and carried him off the boat and up to the lodge as fast as his frozen legs would allow. The black dog shook the water from his pelt, then raced to follow, barking furiously.

Reider had to get the lad out of his wet clothing. Suddenly the frail body shuddered and the youth retched sea water over Reider’s parka. His head fell back with a groan and Reider was struck by his fine features. Too feminine—a pretty boy. Typical foreigner! Reider rolled his eyes—udlændinge!

He kicked open the door, bracing to keep his balance, and hastened to his pallet. They had built this lodge after their frantic flight from Gorm. It was a simple structure, oak wall posts held together with tie beams, but Reider’s and Kjartan’s status afforded them a privacy curtain for their sleeping alcove. It was a bare-bones existence, but it was warm and provided shelter from the elements, except when the thatched roof leaked!

Reider dropped to his knees and deposited the boy on the dirt floor. No use getting the straw mattress wet. He intended to remove the youth’s clothing then put him to bed, get him warm. The shivering dog took up a position at the end of the pallet, barking without surcease, though it looked close to dropping from exhaustion. Reider held up a hand, hoping the animal understood he was trying to help his master. The dog calmed and slumped to the floor, its head on its front paws, whimpering. Reider breathed a sigh of relief.

He stripped off his own wet clothes and tugged on a dry pair of braies from his sea chest. He rubbed his hands together, blowing on his frozen fingers. When some of the feeling had returned, he set about untangling the knotted ties of the boy’s hood. Frustrated, he finally yanked it off, surprised to see a tight skullcap beneath, evidently another peculiar foreign habit. He pulled. Long hair tumbled out, twisted in sodden rattails. Reider gasped. A strange fashion for a boy to have such a long mane! Reider’s shoulder length hair was much the same blonde colour, but this lad’s—it must go to his waist!

One of the boy’s boots had been lost. Reider pulled off the other and rubbed the small, white feet hard. A strange discomfort crept into his belly. The feet were—appealing? He had swallowed too much seawater, a truth borne out by the raw fire in his chest.

He pulled at the bindings of the long furs. They were thick and heavy. It was a miracle they hadn’t dragged the wretch to the bottom of the sea. Whoever this was, his family was not poor. The idea of ransom flitted into Reider’s head.

He pulled the boy’s body against his chest with one arm, intending to ease the furs off his shoulders with the other. His breath caught in his throat. Alarm surged through him. What the—? He remembered the softness above the boy’s ribs. To his consternation, a tingling stirred his pik.

Only the saturated tunic and leggings remained, but the truth of the lad’s gender as his chest heaved could no longer be denied. Reider licked his lips, certain that when he removed the tunic he would see a magnificent pair of female breasts.

You can buy Wild Viking Princess at the online bookstores listed below. 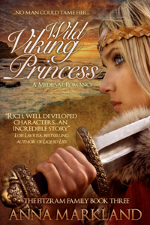