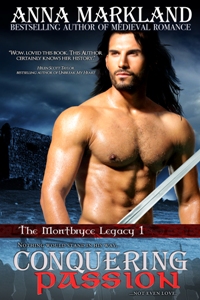 The year is 1066. The world is about to change forever. Can love
survive and flourish amid the carnage, hatred, betrayals and
dangers of the Norman Conquest? Juicy historical fiction.
An intimate story of passion, ambition, conspiracy, and vengeance.

One reviewer said: “…the historical detail is impressive, the events
helping drive the story, intertwined with a very strong romance…
The reader is sucked into…the middle of politics, intrigue, and the
trappings of life in that era…masterfully done…”
– Shelisa “Fiction is Oxygen”

With a weary sigh, Lady Mabelle de Valtesse removed her grease-spattered apron, rolled it up, and gathered a meagre blanket around her shoulders. She sank down in exhaustion onto the stale rushes on the hard stone floor, tucking the apron under her drooping head. Her snoring father, the exiled lord of Alensonne, sprawled in the space allotted for them both in the Great Hall. As usual, she had to prod him to move over.

She had been careful not to step on the slumbering forms—human and animal—in the communal sleeping area of the castle at Arques, a task rendered more difficult by the utter darkness of the early morning hour. A pall of blue smoke from the long dead fire in the hearth hung in the air, making her eyes water. Awakened by her attempts to find comfort, her father elbowed her and asked loudly, “Why are you so late to bed?”

Mabelle gritted her teeth, feeling her shoulders tense. Waking her unpredictable father was the last thing she had wanted to do. “I was not allowed to leave the kitchens until all was tidy. The banquet for the New Year was larger than usual. I’m tired to the bone.”

“It’s intolerable,” he replied, making no effort to whisper. “The only daughter of Guillaume de Valtesse, lord of Alensonne, working like a peasant in the kitchens.”

“Papa, please, not now,” she whispered. “The castle steward made it plain we must contribute if we want to avail ourselves of their hospitality.”

Her irritating father never contributed anything.

“Hospitality!” he sneered. “Where is the chamber I should have, as befits my rank?”

“Hush there!” someone called. “It’s the middle of the night.”

Valtesse bristled and shouted back, “Don’t tell me to hush. I am Guillaume de Valtesse, the Seigneur d’Alensonne.”

“We don’t care if you’re the King of the English,” came the reply. This sentiment was quickly supported by the complaints of others awakened after a day spent toiling for their master. Dogs yapped. Startled cats scurried away, screeching displeasure at having their nightly foraging disturbed.

Mabelle well knew the potential for the argument to escalate. In their wanderings, she had seen her father thrown out of many a Hall because of his inability to control his tongue and his temper. This was the reason for their exile. It was during an argument over land, six years ago, that he had lashed out and blinded and mutilated the Seigneur de Giroux. In revenge, Giroux’s family had captured the Valtesse castle at Alensonne and cast them out. Mabelle’s half-brother, the bastard Arnulf, had aided the attackers, and now held Alensonne.

“I will not sleep with ignorant serfs,” her father began, reaching for the sword at his side.

“Papa, hush, please. I must sleep. You never cease complaining.”

Her father sat up. “You are too impertinent, daughter. Young noblewomen don’t speak to their fathers so rudely.”

Mabelle rolled her eyes, itching to point out that her impertinence and resourcefulness had saved his miserable skin many times. She had told him often enough she believed the only person with the power to end their banishment was their overlord, the Comte de Montbryce.

Muttering, Guillaume gathered his blanket over him, turned over and seemed about to fall back to sleep, but suddenly rasped, “Be ready at first light. We leave for Montbryce.”

“Oui, Papa,” she murmured, trying not to sound surprised. In the beginning of their exile, when she was three and ten, she had followed her father without question. She had learned quickly which servants to befriend. If she couldn’t coax leftover food from a kitchen wench when a lord’s hospitality was meager, she filched it. She shared food with hungry stable boys and was rewarded with oats for their horses. Aiding laundresses in their tasks provided her with clean clothing. She listened to gossip, and used what she learned to her advantage.

Living by her wits had been easier when she was a young girl. There was always something to trade. Now, six years later, it was more difficult. The ugly peasant garb she wore concealed the body of a woman, despite her efforts to hide it. Men now wanted something in return that she had no intention of trading. In a constant game of cat and mouse, Mabelle rarely felt like the cat any more.

For all his faults, her father had shown he was aware of the growing dangers and was quick to protect her, but his volatile temper often led to confrontations and a curtailing of some of her freedom. She appreciated his protection, but was afraid of his inability to control his temper. She had tried repeatedly for the past year to set her father on the path to his liege lord, but he always made some excuse. She sometimes thought he was happier in his misery.

Now he had agreed to go. What had made him change his mind? Perhaps the rumors concerning the imminent death of Edward, King of the English, had prompted him to take note of the winds of change blowing in Normandie. Every Norman knew their Duke William had been promised Edward’s throne. The Comte de Montbryce might be willing to be the instrument to help regain her dowry, lands lost to Arnulf, and now of strategic importance to the Duke.

Her father’s loud snores told her he was not lying awake worrying. She wrinkled her nose, pressing a finger and thumb over her nostrils, shutting out the odors of rotting food and sweat emanating from the rushes. Tucking her knees to her belly, she hoped sleep would come quickly and that on this night she would be too tired to dream of fine clothes, rich food and the comfortable bedchamber that had been hers at Alensonne—before Arnulf had usurped the castle.

Despite her exhaustion, sleep proved elusive as her restless mind thought of the journey to Montbryce. Would this be the means to at last regain the life of respected nobility to which she had been born? She pushed away the insistent notion that if her dowry couldn’t be won back, then marriage to a nobleman would be the only solution. How to accomplish such a thing? Did she truly want to exchange one overbearing noble for another? Perhaps the Year of Our Lord One Thousand and Sixty-Six would bring a change of fortunes for her as well as their Duke.

Mabelle curled into a tighter ball and covered her ears against the grunts of a peasant who had taken advantage of his unexpected awakening to rut with his bedmate.

You can buy Conquering Passion at any of the online bookstores listed below. 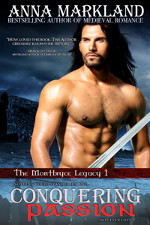