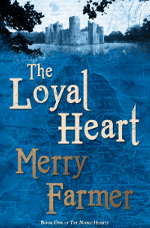 For this week’s Medieval Romance Monday, we are featuring The Loyal Heart by Merry Farmer.

Here is what author Merry Farmer tells us about this medieval romance:

“I began writing The Loyal Heart at one of my lowest points in recent years. I had just been through a bad break-up and was feeling sad, alone, and betrayed. Writing has always been a solace for me, but at that point it was the furthest thing from my mind. I also got into a debate about the Robin Hood legend with a friend at about that same time. As someone who majored in History, the story of Robin Hood has always irritated me because it presents King Richard, Prince John, and the situation in England during the Crusades in such a false light. That’s not the way it actually happened. I was trying to tell this to my friend and wasn’t sure if I was getting anywhere.

Then, in the middle of all that heartbreak and historical indignation, a truly miraculous thing happened to me. I’d just found out that the guy who I’d broken up with six months before had just gotten engaged to a girl he started dating three weeks after we broke up. I was miserable. But in the midst of my misery a question popped into my head. “Would you be happy if you had the perfect man in your life but were never able to write another word ever again?” Before the question finished asking itself I knew the answer. “No! I would rather write.” Then the voice in my mind said, “Then be a Writer and WRITE.”

I started The Loyal Heart that day. I took my disappointment over a love that I thought would be wonderful and combined that with the love that I was really looking for in my life and brought it to life with the character of Aubrey. (Although Aubrey isn’t me at all. She would kick my butt!) Then I drew on the real history of England in the time of King Richard’s crusade to give the story shape. What I hope I’ve come up with is an exciting tale of love, betrayal, and finding what you were looking for in the least likely of places set against an era that people only think they know.”

You can read an excerpt from this exciting medieval romance novel and see where you can purchase it here: The Loyal Heart by Merry Farmer

The Loyal Heart is Book One in The Noble Hearts series.  We will be featuring the second book in this exciting medieval romance series, The Faithful Heart, in our next Medieval Romance Monday feature, so please come back to read more about it.  If you just can’t wait that long, you can head right here: The Faithful Heart by Merry Farmer.