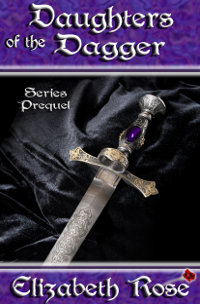 Prequel – Daughters of the Dagger by Elizabeth Rose

Prequel to Daughters of the Dagger series

Mirabelle de Burgh is barren and will do anything to give her husband children. She has heard of a superstition, that to buy jeweled daggers from a blind old hag will ensure she will conceive. One baby for each dagger bought.

So she secretly hunts down the old hag with the daggers who resides in the less than desirable part of town, and prepares to buy her daggers.

Though she has only enough gold for four daggers, there are five and she wants them all. This is where all her trouble starts.

Free Preview of the Prequel to Daughters of the Dagger

Mirabelle de Burgh slipped four gold coins from the pouch at her waist and slid them quickly across the table toward the old hag with the clouded eyes. She hoped this was the old blind woman she’d been searching for, and that the cordwainer’s wife in the high part of town had been telling the truth and not just idle gossip. If this was only the product of wagging tongues and not superstition as she hoped, then she’d just seen the last of her coins. Being on Grope Lane, she was already surprised that she hadn’t been accosted.

She pulled the hood of her cloak higher and glanced nervously down the dark, narrow street that wasn’t really more than an alley. She knew she shouldn’t be in this questionable part of town, and especially not unescorted. This is where the beggars, the thieves and the tarts all saw to make their living.

Grope Lane was scattered with litter and rotten fruit as well as discarded bones from rancid meat and old fish. Pots filled with urine were being dumped out of overhead windows constantly, and she had to walk a crooked path on her way here just to keep from being splashed.

Pigs roamed freely amongst the crowd as well as stray, mangy dogs. Women in gowns that exposed most of their breasts as well as their legs leaned lazily in front of the pub as well as in every shadowed doorway. And though she was hidden beneath her cloak and covered from head to foot, Mirabelle knew every filthy, despicable man in that alleyway had his eyes fastened on her at that moment.

A shiver coursed through her and as she’d put the coins on the table, she couldn’t help but notice her own hand shaking. She risked everything by sneaking away from her husband and coming here to begin with, but she’d done it out of naught more than desperation.

The odor clinging to the heavy air filled her nostrils and twisted her stomach, making her want to wretch. She felt lightheaded and knew she needed to get away from here quickly before she swooned. Her husband, Talbot, Earl of Blackpool, wouldn’t be happy that she’d stolen his coins to begin with, let alone spent them on something he would consider blasphemy – the work of the devil. But that’s not the way she saw it. This was merely acting on a superstition, nothing else.

She had to hurry, as Talbot would be finished at the blacksmith’s soon and realize she was no longer waiting for her shoes to be repaired at the cordwainer’s. She looked back to the old blind woman sitting behind the table, only hoping she truly had the daggers even tho though her table top was empty.

Mirabelle believed the superstition that if one bought a dagger from a blind woman, she was sure to conceive a child anon. Ever since her marriage to the earl two years prior, she had not been able to bear him an heir. He wanted a son desperately, and she was determined to give him one, no matter what she had to do to achieve it.

“Hurry,” she said the to the woman, glancing back toward the main street. “I’ll take as many daggers as my money will buy.”

The old woman reached out her bony fingers, patting the table, feeling around the surface. Then she picked up a coin in her hand. She ran her thumb over it and tested the weight in her palm to make sure ’twas gold. Then she brought it to her face and sniffed it and her tongue lashed out and she tasted it as well. When the woman was satisfied that it was gold indeed, she reached under the table and pulled out a tray with five of the most beautiful and expensive looking daggers Mirabelle had ever seen in her life.

Each was an etched metal with an intricate design that ran over the two-toned hilt and down the blade. The top had a knobbed grip that reminded her of a crown. And in the center of each hilt was mounted a large oval gemstone, each being of a different type and of various colors. Her heart beat wildly. She wanted them all. She wanted a child for each of the daggers.

“I’ll take them all,” she said, scooping them into a pile.

The old woman’s hand shot out and covered hers and Mirabelle felt as if she’d been struck with a hot iron rod as her finger tapped the top of Mirabelle’s hand. She pulled her hand back and held it against her chest, not liking the way it felt.

“You only have enough gold for four,” the woman told her. “So choose carefully. And remember, if you name each of your children after the stone in the hilt, they will be sure to find true love in this lifetime.”

“True love? Really?” She looked back down the alley, searching for her husband. Thankfully he was not in sight. She’d once been married to a cruel man who had beaten and hurt her, and she was just lucky when the earl killed him and claimed her as his bride. The moment he’d saved her from the wretched man, she’d known he was her true love. She was so happy now, and she wanted her children to be happy as well. And most of all, she wanted to let the earl know she was a good wife, by giving him the sons he wanted and deserved.

She had no choice. She had to buy these daggers and assure herself of not only conceiving a child but sealing her children’s fate of true love as well. She was so excited she could barely stand it.

“I want all boys,” she announced. “I haven’t been able to conceive a baby for my husband and I don’t want his eye wandering. He wants sons more than anything, and when we married I promised him I would give him many.”

The old woman nodded slightly. “The purchase of each dagger ensures you will get what you want.”

“All right then,” she said opening the large bag attached to her waistbelt. “I will choose now.” She ran her hand over the beautiful daggers and surveyed the precious stones twinkling in a stray beam of sunlight that happened to shine down through the tall, two story, top heavy buildings around her. “But please, can you tell me the name of each stone so I will know what to name my children in order for them to attain their true love?”

“The dark red stone is a ruby,” the blind woman told her, reaching out and somehow knowing just by the feel of it, which one it was. She held it up to her. “This is one of the hardest stones and also the most precious. This child will be very courageous and strong, as well as have a heart and a mind of their own.”

“I like that,” she said anxiously picking up the dagger with the purple stone and handing it to the old woman. “What is this one, please?”

The old woman ran her fingers across the stone seeming to be in deep thought. “This is amethyst. The child of this stone will center around perfection as well as have a positive outlook on life and a strong spirit. This stone also ensures business affairs to prosper.” The woman put down the dagger and told her about the others without picking them up. “The golden stone is amber. The fire within it has the power to purify and heal though it is the most delicate of all the stones. This is also the most virtuous and said to bring good luck to warriors.”

“Aye, that sounds wonderful,” she said, listening intently. “And what about the blue stone?”

“The blue stone is sapphire,” the woman told her. “This is the stone of awakening and this child will know prosperity and abundance in more ways than one. And the child will find joy, though it may not be in such a virtuous form as with the amber.”

“Prosperous, yes,” she said, devouring what she was hearing, even if she knew her husband would object to having sons named after these stones. But she’d convince him. Her children’s fate would be formed because of it.

“Quickly,” she said, glancing at the beggars and dirty men eying her from the other end of the street. “Tell me about the last stone. The black one.”

“You might not want to consider this one,” said the old woman, reaching out to take it away.

“Nay, please,” she said, laying her hand on top of the woman’s, causing her to release it and replace her hand back under the table. “I want to know.”

“That is onyx,” said the old woman. “It is the most powerful of all the stones, and this child will be unstoppable.”

“But . . .” the old woman held up a finger. “Because of the orange line down the middle, there is much duality involved. So much, so that one may think this child has gone mad. This one will be wild with no boundaries at all. And they will also follow their path alone, for this is not like the other stones. I don’t advise you to choose it, but the decision must be yours.” The old woman held her hands on her lap and waited for Mirabelle’s answer.

Once more she scanned the gems, knowing this was taking much too long. She liked everything the woman said, but she needed to choose quickly. She ended up taking the old woman’s advice and taking all but the black onyx.

“All right, I have chosen and will put the blades into my pouch,” she told the blind woman.

“Four only,” she reminded her.

“Of course,” she said, scooping up the ruby, sapphire, amethyst and amber ones and placing them into her pouch with nimble fingers. Mirabelle was very aware of her surroundings, knowing she had to guard these well. She pulled the drawstring closed and once more looked at the dagger with the onyx stone.

Black. The color of death, she told herself. She feared it, yet it called to her at the same time. The old woman had said this child would be the most powerful of all the other stones. She wanted to give her husband a powerful son who could someday be a great leader and ruler. She struggled with her decision, not wanting to leave any of them behind, but not having enough gold to buy them all. Still, she knew she had to have it.

You can get Prequel – Daughters of the Dagger by Elizabeth Rose for free at any of the online bookstores listed below: 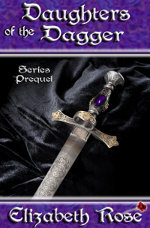