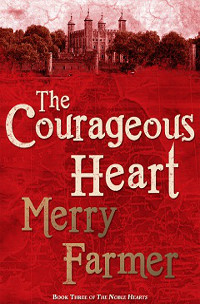 The Courageous Heart by Merry Farmer

5.0 out of 5 stars. Wonderful Series!  The Courageous Heart was a wonderful read that had some unexpected revelations in it. My heart went out to Joanna and her quest. I am definitely a fan of Merry Farmer now!
– Amazon Review

Book Three of The Noble Hearts

He was the hero of the Holy Land, King Richard’s favorite, a bold and courageous knight.  But when Ethan Windale returned from the crusades he lost everything, his home, his pride, and his dearest friend.  Years later, alone and adrift, his courage is tested once again when the fate of his old rivals falls into his hands.  With one word he can destroy his enemies and regain the home he lost, but to do so he must betray the woman that even war and death couldn’t drive from his heart.

Joanna Dunkirke has sworn she will never forgive Ethan for leaving her or for his part in her brother’s death.  But when her master and mistress are imprisoned in the Tower of London it is Ethan who comes to her rescue.  Caught between anger and a passion she has fought against for years, Joanna embroils herself in deadly court intrigue.  When a shocking act of devotion changes everything she thought she knew about the man who destroyed her life, she must choose between her heart and her duty.  But can she really trust Ethan?

Torn apart by betrayals that neither can forgive, bound together by a passion that cannot be forgotten.

Excerpt from The Courageous Heart

Joanna paced through the rows of headstones in Windale church graveyard, a bundle of simple wildflowers clutched to her stomach. The ache that hadn’t left her heart for two and a half years throbbed as she reached the end of the third row. She stopped but couldn’t look at the stone. She bit her lip and stared off over the hills and fields of her home, Windale Manor, instead.

The winter chill had gone. Spring was in the air. A promising breeze wafted the rich scent of the orchard blossoms from Kedleridge, on the other side of the hill. The rhythmic melody of the farmers singing as they furrowed sleepy rows through the fields should have cheered her, today of all days.

She swallowed and forced her eyes to the name carved on the stone where she stood.

Two and a half years and still she expected to hear her brother’s gentle voice in the manor halls, to see him waving to her as she walked through the fields. Her handsome, hopeless, wonderful fool of a brother.

She knelt beside his headstone and squeezed her eyes shut to keep her emotions at bay. Toby had been all she had, the last of her family. They’d shared a womb, shared everything, from the day they were born to the day Toby left home with Ethan to fight in King Richard’s crusade. She swallowed, opened her eyes, and lay the bundle of flowers at the foot of the headstone.

“Happy birthday, Toby,” she told him, blinking back tears. “I miss you. I’ve been so lonely without you. I-”

There was so much more she wanted to say to him, so much that had been left unsaid. Too much. Toby had been wrenched away from her long before his tragic death. In the five years since he had left for the crusade she hadn’t had one rambling conversation with him. They hadn’t had a chance to stay up all night sharing their secrets, laughing over the futility of their dreams until they cried in each other’s arms. They hadn’t had each other to keep the loneliness at bay. And she knew full well whose fault that was. Her grief coalesced into bitter resentment.

“Joanna?” A small hand tapped on her shoulder. Joanna blinked and pivoted to face the black hair and solemn blue eyes of little Wulfric Huntingdon. “Joanna?”

“Yes, my lord?” She cleared her throat, blinking to banish her tears, and forced a smile.

Her little lord, a sweet replica of his imposing father, stared up at her, chubby cheeks giving him the frown of a stoic cherub. “There’s a man at the house.”

“Oh?” Joanna squatted to look the boy in the eye. “Is it your papa?”

He shook his head again.

“A stranger?” Joanna repeated, brushing an unruly strand of hair away from Wulfric’s face. “What kind of stranger?”

“He told Mama his name is Ethan.”

Joanna’s heart plummeted. She shot to her feet, hands balled into fists at her sides, turning towards the manor house. Her pulse roared when she saw an unfamiliar horse standing near the edge of the common. Aubrey stood talking to a man in a traveler’s cloak.

“I’ll murder him!” she hissed, out of breath after just those words. How dare he show up today, after all these years. What gave him the right to disappear for years and then just walk back into her life at random? “Come on, my lord.”

Joanna scooped Wulfric into her arms, resting him against her hip and charging out of the graveyard and up the road to the manor. She would strangle Ethan with her bare hands. She would gouge his eyes out with a red-hot iron. She would slice his balls off with a rusty dagger. Ethan would regret the day he walked out on Windale, walked out on her, stealing Toby with him.

Her rage fizzled when she reached the common and the cloaked man turned to face her. He was in his middle years with graying hair and a scar on his cheek. He was not her Ethan.

“Oh,” she stuttered, glancing past the man to Aubrey.

Aubrey looked as confused as Joanna felt. She softened at the sight of her son. Wulfric held out his arms to his mother and Aubrey crossed in front of the stranger to take him from Joanna.

“Joanna, this is Sir Ethan Eversham.”

“Sir Ethan has come from London.” Her voice was thready and puzzled.

“I’ve been sent by the crown, my lady, to bring word to the nobles of Derbyshire,” Sir Ethan said. He continued as if he had already been making an explanation before Joanna arrived. “King Richard has returned to England. He has taken up residence in London, in the Tower.”

“The king is back?” Aubrey shuffled Wulfric in her arms as he poked at the netting holding her hair back. “We hadn’t heard he’d been released.”

“Emperor Henry released him last month, my lady. King Richard arrived in London last week and is eager to resume complete control of his kingdom from his rebellious brother, Prince John.” He shifted his weight, glancing back towards the manor house. “I have a specific message for your husband, my lady. Is he at home?”

“No.” Aubrey pushed Wulfric’s hand away from her ear where he was now trying to stick his finger. “No, he and Jack, that is, Lord John, are in Derby today.”

“This message concerns him as well. It is a message of utmost urgency.”

“I could ride into Derby to fetch them,” Joanna offered. Heaven only knew that she needed something to take her mind off her troubles.

“Thank you, Joanna, but I need you here,” Aubrey said.

“Joanna?” Sir Ethan blinked and looked at her as though just seeing her. “Not Joanna Dunkirke?”

Joanna’s eyebrows rose. She glanced to Aubrey who seemed just as surprised. Then she turned back to Sir Ethan. “Yes. That’s me.”

“I have something for you,” he said as though he couldn’t quite believe it himself.

He walked back to his horse and unfastened the portmanteau. Joanna and Aubrey followed him and stood waiting as he sorted through its contents. He took out a bundle and stepped towards them, presenting Joanna with a thick packet of battered old parchment tied with dirty string.

“I’ve been charged with delivering a backlog of missives that have accumulated in the court offices these last few years. So many letters arrived in the court offices in London at various points as soldiers returned from the Holy Land that we haven’t been able to deliver them all.” Sir Ethan held up the packet. “We’ve had these particular letters for over three years. I have stacks of the things to deliver all across Derbyshire, but yours are the only ones not addressed to a noble. To tell the truth, I didn’t think I’d actually find you.”

Joanna took the bundle. Her curious frown tumbled into a look of shock at the writing on the top letter of the pile. Joanna Dunkirke, Windale Manor, Derbyshire. The lump in her throat squeezed and all color drained from her face.

“What’s wrong?” Aubrey put a hand on her shoulder.

You can buy The Courageous Heart at any of the online bookstores listed below.