The Dragon and the Dreamwalker by Elizabeth Rose (Elemental Series – Book 1: Fire) 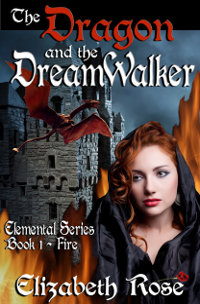 The Dragon and the Dreamwalker by Elizabeth Rose

The Dragon and the Dreamwalker
Elemental Series
Book 1: Fire

Drake Pendragon is the feared warrior known as the Dragon’s Son. He saves a woman from  the sacrificial stake just as the dragon rises from the sea to consume her. Little does he know she is also feared by the people of Lornoon, as she can walk through fire and not be burned.

Brynn is saved by a knight and is horrified when she learns of his identity and that he was the one to seize her castle. She is an Elemental of fire and has both human and faerie blood in her veins. She gets her strength from fire which cannot harm her, but water can drain her of her life essence faster than anything. She is also a dreamwalker, able to leave her body at will and travel on the etheric plane.

Now Drake must stop the dragon, but needs the lady of fire at his side to do it. But she must be willing in order for the prophecy to be fulfilled. And Brynn is anything but willing.

Free Preview of The Dragon and the Dreamwalker

Brynn spied the nighttime candle next to the bed and brought it to her. She held her hands over the fire to help regain her strength.

She took a moment to focus her vision in the semi-darkened room. Though she feared the man in the shadows, she still had the odd sensation of being comfortable with her surroundings.

She looked up to the velvet draperies that hung from iron rods around the bed. Her heart beat faster and she sat upright, barely breathing at all as she recognized the carved spindles at each corner. Her father had carved these spindles – engraving his love for his wife in the vines and faeries that wrapped around and around, climbing to the top and ending in a moon or star. She knew now why she felt at home. She was home. Resting in her parents’ bed.

“No!” she exclaimed, not wanting to believe it were true. She placed the candle on the bedside table. Her eyes shot to the wall looking frantically for her father’s banner – his crest of sword and shield, a mighty arm holding one, a feminine arm the other. But it was no surprise when she found it missing. Instead, a banner with a fierce fire-breathing red and black dragon consumed the spot.

“You act as if you’ve seen a ghost. As if my castle’s dwellings could speak to you.” He still stayed hidden in the shadows.

“Every stone in the walls, every rush on the floor – they cry with anguish for the lives that have been lost here recently. And if you are so bold as to call this your castle, then it can only be you who is responsible for the blood that’s been shed on these grounds.”

“I claim many a triumph of the men I’ve conquered or the fiefs I hold, but I cannot put my mark on the lives lost here. I claim the castle only.”

“You’re parents?” he asked, sounding bewildered. As if he didn’t know who she was when he saved her from the dragon only to claim her as his prize.

She grabbed the coverlet from the bed and wrapped it tightly around her, easing herself to the floor and hoping her father’s ivory-handled dagger still lay hidden under the loose floorboard. She would never be the spoils of war. She’d kill him before she lived at the side of the man who murdered her parents.

“I’ve heard it said that the former lord and lady of Thorndale Castle had a daughter. A daughter who befriends fire and has magical powers at her command,” he answered from the darkness.

“And I’ve heard it said that the man who leads the Klarens into battle, killing and ransacking everything in sight is a black-hearted man who gains his power at the hands of others’ misfortunes. His reputation is known throughout the hills of Lornoon. He’s the one mothers warn their daughters about. He’s the one they mention to threaten their children when they’re bad. Yet his name is never spoken aloud, for fear the darkness that possesses this man’s soul may follow his name, striking down dead the one who spoke it.”

It was then he stepped slowly out of the shadows and into the soft light of the fire that flickered from the bedside candle. The glow encompassed him as his dark eyes bore into her. One fist gripped a tankard of ale in front of him. He was tall, handsome, foreboding and carried his body frame straight and proud as he strolled toward her. His chest was bare – wide and sturdy. Every muscled ripple showed in his physique. His arms were huge in a strong sort of way, empowering the rest of his warrior body. And like a warrior, he still carried a weapon though he was half-clothed.

His gaze penetrating, she felt a slight hesitation in his action as he stopped in front of her with his free hand hovering above the sword strapped at his side. Almost as if she’d called him a traitor or insulted him by saying the legends of his name aloud. He was the most dangerous man alive. And she was alone with him in the dark, with only a coverlet between them.

“’Tis true. It is you,” she said barely above a whisper. “I’ve heard of your crest described by the bards. You are Drake of Dunsbard, are you not?”

“You so daringly let my name slip past your noble lips. Aren’t you afraid you’ll drop dead at my feet for such carelessness?”

“I’d welcome death to the alternative of what you’ll do to me.”

“So sure are you that I’m that dangerous?”

“You are a Pendragon!” she cried. “You’re the one they call the Dragon’s Son. You are the devil and you’ve come to claim my soul.”

He put the tankard on the bedside table and stared down at her. All the way to her soul. She knew she should look away, but stubbornness made her match his glare. It was said that the son of the dragon could turn one to mere ashes just by fixing his gaze on a person. But it mattered not to her. She had an ally in fire, and his dangerous stare could not harm her. She’d be protected from the fires of hell.

He chuckled softly, his lips turning up into a lopsided grin that only made the indention in the cleft of his chin more pronounced. His ebony eyes sported a glimmer as he seemed to find amusement in her words. Then the glimmer was gone and the danger was back. He took a step closer, so close that she could feel his breath on her face when he spoke, though he did not touch her.

“You’re only partially correct with your legends.”

She didn’t trust him so close to her and knew she needed protection. She needed her father’s dagger, but it was hidden under the floor on the far side of the bed. She scooted away from him, never turning her back to him, and shifted around the foot of the bed.

“I am a Pendragon,” he admitted, “’tis true. And I am the one they call the Dragon’s Son. But I am not the devil and I want nothing to do with your soul.”

He made his way toward her, and she darted around the back side of the bed, holding her coverlet tightly in the process.

“I don’t believe you.” From the corner of her eye she looked to the floor, trying to remember which board the dagger was under. Then her toe caught on a loose end and she knew she’d found it.

He took another step toward her, this time with more definition. It was all she needed to see. The look in his eyes said he knew she was about to deceive him. She had to move fast. She dove to the floor, dropping the coverlet that concealed her nudity and tore at the floorboard, groping inside for the weapon.

His boot heels clicked on the floor and stopped in front of her face. She grabbed for the dagger in one final attempt to protect herself from him, but to her horror, she found the hiding place empty. She stiffened when she felt his hand on her arm. Her breathing labored as he pulled her to her feet, her body trembling from his mere presence. He pulled her closer, her hips grazing the flat end of the sword at his waist.

“Looking for this?” Still holding her arm, he raised his other hand and displayed her father’s ivory-handled dagger in the air.

You can buy The Dragon and the Dreamwalker at any of the online bookstores listed below.