The Sheik and the Siren by Elizabeth Rose (Elemental Series – Book 4: Water) 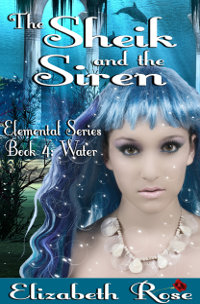 The Sheik and the Siren by Elizabeth Rose

The Sheik and the Siren
Elemental Series
Book 4: Water

Lord Asad, or Ace, as he prefers to be called, is captain of the Paradigm, an overseas trade ship. He is a risk-taker and determined to be the first man to hear the siren’s song and live to tell about it. So he orders his crew to tie him to the mast while they hide below deck as the ship sails through Death’s Door. And to his surprise, he not only hears the siren’s song, but comes in direct contact with her as she and her misfit pirates decide to pillage his ship while he can do nothing but watch.

Ebba-Tyne is a siren and an elemental of the water. She has fae as well as human blood running through her veins. She gets her power from water, though hot, desert air can kill her. Once again, a fool sailor and his crew is attempting to sail through the straits. And she uses her siren’s song to distract them, as her misfit men – the maimed and wounded knights of her late father’s castle – see to collecting what they need from the ship to survive.

When she realizes the man aboard is tied to his own ship in order not to fall under her siren’s spell, she finds him exciting and intriguing. But he looks a lot like the sheik who came from a faraway land and caused death and destruction to her island, so she warns him not to return if he values his life. But when Ace decides to go back and collect his stolen goods, the past becomes the present. Ebba needs to beware of the only man who has ever intrigued her, and Ace has to face his past in order to keep Ebba from being killed.

Can a siren and a son of a sheik learn to look deeper within to accept themselves, and acknowledge the fact that enemies have fallen in love?

Free Preview of The Sheik and the Siren

Tied to the center mast, Ace’s heart beat quickly as the faint sound of the siren’s song floated across the water and to his ears. His men were thankfully safely in the hold, their own ears plugged by coarse wool. But he could hear every alluring beautiful, haunting note as a woman’s voice surrounded the air around him and about drove him from his mind.

She sang about the water and of the life beneath the sea. She sang of a coral cave and something about a mystical, magical crystal dolphin. He took it all in and tried to remember every word. But he found it hard to concentrate, as the bulge beneath his tunic distracted him and all he could think of was that he had to get this siren of the seas into his bed. He needed to take her, and he needed her badly. On the deck. In the water. It didn’t matter where, but all he knew was that his body cried out to mate with her and he needed to go toward the sound of her singing. Nothing else mattered anymore but this – nay, nothing at all.

He pulled at the ropes that bound him, unable to move, making him shout out in frustration.

“Arrrgggghhh!” If he didn’t have her soon, he swore he would burst. And if Boots hadn’t tied him to the mast, he’d have dove into the water by now and be swimming toward the rocky crags straight toward the sound of the siren and toward his death as well.

“Show yourself!” He shouted at the top of his lungs. “Come to me, my siren of the sea. I hear your voice. I want you – I need you.” He looked toward the bulkhead of the ship but could see naught through the thick fog.

The humid salt air weighed heavy on his lungs and he felt as if he could barely breathe. The winds had oddly diminished, and the ship barely moved now. All was silent – too silent around him and he felt as if he were in the eye of a very deadly storm. If he was to stay here, dead in the water and haunted by her alluring song much longer, he’d chew through the ropes just to get to her, he swore he would.

Then he saw the oddest thing. A long line of dead fish, which the ship was about to cross over. And once the bow of the Paradigm crossed this line of death, a gale of wind blasted from nowhere, hitting the larboard – the loading side of the ship so hard, the masts and sails were nearly touching the water on the opposite starboard side. One more gust of wind and the ship shot forward, moving at a good clip straight through Death’s Door.

The plan was now in motion and even if he wanted to, he could do naught to stop it. They were in Death’s Door now, with the song of the siren driving him mad. And he prayed he’d been accurate in plotting the course, because if not, he would have not only sentenced himself to death, but by his own hand he would have taken the lives of every man on his ship as well.

Rain now pelted him in the face, his long hair whipping, and stinging him in the eyes. His hands over his head, he could do naught to stop it. And that damned siren’s song still floated on the breeze and echoed in his head, calling him closer . . . closer . . . to his death.

Then, when he thought he would burst with want from a nymph he had never even seen, the sound of grappling hooks hitting the starboard side of the ship caught his attention. Someone meant to board. He couldn’t even believe this. How could it be true?

Then, the hands and dirtied faces and bodies of a dozen broken men made their appearance as they hoisted themselves over the side rail and climbed aboard his ship. The men were scarred, obviously from a furious battle. Some were missing fingers, and one man was missing an entire arm. Several of them had eye patches and one was missing his leg from the knee down, a wooden peg tied to his stump in its place.

They seemed surprise he was talking to them. Even more surprised he was tied to his own ship. That amused them and they laughed, taking wool from their ears as they scurried aboard.

“You can’t do anything to stop us, you fool!” said one, picking up a skein of rope and ripping a canvas covering from over a barrel and tossing them over the side into one of their boats. They proceeded to take his fishing net. Next, they cut free and rolled a barrel of wine over the deck, obviously meaning to take that as well.

“Where’s your cargo?” asked a man who was built like a retaining wall with a long scar across the side of his entire face. “You are a trade ship, are you not?”

“You’ll what?” said the man with the peg leg, smiling and spitting at Ace’s feet. He had a dagger in his hand and held it up in front of Ace’s face. “We’ll take your provisions too as well as the clothes on your back.” He reached over with the dagger as if he meant to cut the clothes right off of Ace.

“Leave him be!” called a female voice from the side of the ship. “Get the goods and let’s be on our way. You are not to harm any of them, do you understand? That is not our purpose here.”

Ace turned his head to see a young woman with alabaster skin lifting her body over the side of the ship. She had large brown eyes and long black lashes, and light pink lips that looked like a little bow. Her hair was long and wavy, and a blue-black, mostly blue, that reminded him of the color of the sea. It hung in front of her body, covering her chest. With one brush of her hand to push it away, it was almost like she was tempting him purposely, as his eyes traveled quickly from her face scanning her entire being.

She stood there nearly naked, just a small, thin linen shift covering her body. It hung only halfway down to her knees. It was white and wet, and left naught to the imagination, and he couldn’t help his eyes from settling on the two pink spots beneath the fabric just atop her large rounded swells. He also noticed a dark patch showing through her shift at the juncture of her thighs and would bet a bag of gold that it was blue as well.

“Who are you?” she asked curiously, gliding barefooted over the deck toward him, not at all affected by the ship rocking to and fro. A necklace made from shells was around her neck and clicked together as she walked toward him. Shells of many sizes and colors were interwoven in her long hair, as well as starfish and an occasional strand of seaweed. She looked like she was a part of the sea. He found himself drinking in her beauty as she stopped right in front of him and her eyes looked to the depths of his very soul.

The band of men were now ransacking his ship, having found some of the provisions and throwing barrels of apples and nuts over the side of the ship and into their boats, eating as they pillaged his wares.

“I said . . . who are you?” she asked once again, coming even closer. When he didn’t answer, she started once again to sing softly so only he could hear her, and though he didn’t think he could grow any harder, he was wrong. His arousal strained beneath his braies, making his tunic stick out like a sail filled with wind. She noticed it as well, and smiled.

“Stop,” he cried out, shaking his head back and forth, straining at the ropes. Damn, why’d he tell Boots to tie the knots so tight? “Stop and I’ll tell you what you want to know.”

You can buy The Sheik and the Siren at any of the online bookstores listed below.