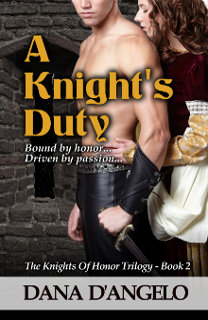 A Knight’s Duty by Dana D’Angelo

Book Two in the Knights of Honor Trilogy

When rumors and accusations of high treason find their way to the king’s ear, he dispatches Derrik d’Evant, a trusted young knight and royal envoy to find Lord Stanbury and bring him to stand trial.

But when the envoy arrives at Stanbury Castle, Amelie de Calmette, the lord’s daughter, is forced to acknowledge the consequences of these allegations. It’s now up to her to track down her father and prove his innocence before it’s too late …

Determined to fulfill their missions they push their suspicions aside just long enough for a spark to ignite between them. Then as they become embroiled in a web of royal treachery, danger and deception, they discover that nothing is as it seems when duty and passion collide.

Note: While this story is a part of The Knights of Honor Trilogy, it can be read as a stand-alone book.  Visit Dana’s website at: www.dana-dangelo.com/a-knights-duty.php

Read an Excerpt from A Knight’s Duty

His eyes dropped to her mouth, watching her soft tongue dart across her lips.

The corners of his mouth curved upward as if he knew which direction her thoughts had gone, and that she wanted nothing more but to feel his lips brush erotically against hers.

This has to stop, she thought fiercely. Yet even as she considered this, she was helpless to do so. The heat was becoming almost unbearable now, the fluttering in her heart, wild with excitement and aye, she will admit it to herself, fear — a fear that her control of the situation was slipping away fast. It was madness, she knew. She had tight control of her actions. In fact she had spent a lifetime successfully controlling every aspect of her life. Yet this man, with only one melting look, could strip away her barrier, her one protection, and leave her feeling stripped naked, vulnerable, and wanting something that only he could deliver.

Derrik’s hand slipped around her nape, gently cupping the back of her head. His other hand trailed down and lightly clasped her jaw. He then tilted her head ever so slightly to the side.

“What are you doing?” she asked, watching him breathlessly, the blood humming through her veins.
Her gaze settled on his mouth as she became mesmerized by his lips which were inching, closer and closer.

With his lips just above hers, his eyes locked onto her brown ones, and he murmured, “You entice me too much, my lady.”

And she was very enticing. He had kissed a number of women; he had even stolen a kiss from the object of his affection when he was young, but he had never felt this all consuming desire to savor the sweetness from one woman’s lips. His brain told him to stop. He knew that one kiss wouldn’t satisfy the raw hunger that ignited the moment he saw Amelie standing at the foot of the castle steps.

But even as his mind told him this, his body continued to act on its own accord.

His eyes followed his long fingers as they traced her jaw line, caressing her smooth, silky skin. They trailed along her throat, feeling the fluttering pulse there. His mouth stretched into a smile to discover that she was not wholly unaffected by his touch. Her breathing was erratic, coming out in short, rapid spurts, as if she was underwater, struggling for air.

But the smile that touched upon his lips faded as his own breath quickened. And as his lips hovered over hers, as their breaths intermingled, the roar of his racing heart drowned out all other sounds. His eyes fastened to her mouth once again and all his thoughts, all his desires zeroed in on her plump, luscious lips.

Like a loaded cart set in motion along a hill, there was no way to turn back; he could only move forward, could only go where temptation beckoned.

And when their lips finally touched, the electricity as powerful as a lighting bolt ripped through his body, awakening, charging it, causing that part of him, which had been asleep, to become fully aroused, fully alert …

You can buy A Knight’s Duty at the online bookstores listed below.