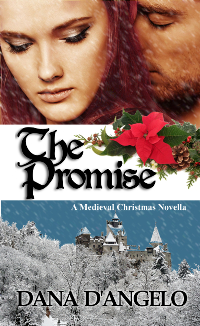 The Promise by Dana D’Angelo

Sir Gavin the Bold appears one winter evening demanding payment for saving the life of Baron Clifton de Leraye. The knight claims that he is entitled to marry one of the lord’s three daughters.

Except the claim is called into question.

With the family’s honor at stake, and her sisters’ futures on the line, Lady Estella de Leraye does all she can to protect what little integrity the family has left, even if that means agreeing to marry the dark stranger.

As she struggles to come to terms with her plight, she finds it equally difficult to fight her growing attraction to the handsome knight. But will his charm and allure prepare her for the secret she will soon discover?

Note: This medieval Christmas romance novella is approximately 29,000 words or about 80 print pages. Although the story has romantic elements, it does not contain explicit love scenes.

Read an Excerpt from The Promise

Estella looked past the first knight, and when she saw an even larger one, her eyes widened in alarm. In the full light, this second knight looked even more frightening and dangerous than his companion. Every step he took seemed deliberate and commanding, as if he was a lion surveying his domain. The air surrounding him crackled and even from this distance, Estella could sense the power that emanated from him.

Like his friend, he wore a thick woolen cloak that accentuated his warrior’s physique. The material stretched across his broad shoulders and draped over his massive chest.

He glanced her way as if he was aware of her intense perusal of him. His unwavering gaze made Estella flush.

He searched her face, his eyes lingering on her countenance for what felt like an eternity. It was as if he could see through to the center of her being, could hear her thoughts. But how could that be? She had never met this man in her life. And as far as she knew, no one could read minds, could they? Her fingers dug into the trestle table, needing somehow to feel something solid, something to steady her trembling limbs.

His eyes scanned over the rest of her body, his gaze settling on her breasts and then her hips. Estella felt an inexplicable urge to cover herself as a wave of heat coursed through her body. He raised his eyes to hers and time stood still.

When he broke away from the electrifying contact, Estella felt the warmth being withdrawn as if a servant had opened the shutters, and let the cold air inside. Estella let out her breath in a rush, suddenly aware that she had been holding it.

This man was dangerous. That much she could tell, and she suppressed an urge to shudder.

You can buy The Promise at any of the online bookstores listed below.