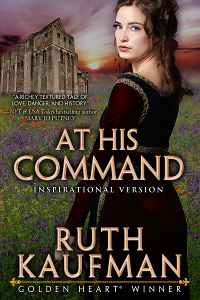 At His Command by Ruth Kaufman – Inspirational Version

Can love and faith surmount duty and royal commands?

England 1453: Sir Nicholas Gray planned to go on a pilgrimage after fighting the French, but King Henry VI sends him to protect the recently widowed Lady Amice Winfield from undesirable suitors. Though Nicholas intrigues her, Amice yearns to run Castle Rising without a man’s control. Mutual interest and affection grows, yet serving opposing factions seeking to rule England threatens to pull them apart.

At court, the king and queen reject Amice’s pleas and choose a new husband, a highly-ranked lord who’ll provide political connections and coin for the king’s depleted coffers that Nicholas cannot. How can she follow the king’s command when she’s a scribe for his rival, who she believes should rule? How can she marry another man when she’s falling in love with Nicholas?

O my God, I trust in thee: let me not be ashamed, let not mine enemies triumph over me.

Free Preview of At His Command
(Inspirational Version)

“Look again,” Nicholas replied. At first he too had thought the horse was riderless. Now he could see a woman collapsed on the animal’s back. Her black hair draped down its withers, mingling with the horse’s mane. The palfrey placed each step as if trying not to jostle its burden.

Another horse, a brown rouncey ridden by a thin, balding man, galloped after the palfrey. A look of triumph brightened the man’s face as he spotted the horse ahead of him. He bent forward, extending his hand. Fingers like talons grasped the woman’s tangled hair.

Pain seared her scalp. She dropped into a puddle. Stunned by her fall and her stinging head, Amice could only stare at her tormentor while freezing water soaked her clothes. How she hated him. How she regretted her desperate flight from home. What other choice did she have?

Panting, cold air stinging her throat, she sought a path to escape the strangers. Alarm coursed through her. She focused on the man at the head of the group. Anxiety and uncertainty warred within her though she sensed an almost tangible power emanating from him. The wind tossed his long black hair as he stared down with a stern expression.

Will he help me? Am I better off with him or…? If only she still trusted God for guidance. If only she still believed. Before Amice could decide, branches snapped behind her. Harry ran into the clearing. Instinctively she moved closer to the commanding stranger.

“I am Sir Nicholas Grey,” he announced, his voice deep. Confident, yet reassuring. “And you are…?”

“He is not my father. I flee to escape him, true, but because he’s trying to force me to marry him. His men control my home. I need to reach friends at Caister Castle and get word to my cousin Cromwell,” she said. “You must believe me.”

Nicholas studied the pair as the petite, soggy woman spoke. She’d begun to shiver, no wonder as she had no cloak and only one shoe. With all the mud coating her gown he couldn’t guess at its quality. But her speech and bearing, the way she confidently met his gaze though her green eyes were filled with apprehension, indicated she was a lady. For certes she was beautiful, even splattered with grime. And her green eyes conveyed an intelligence that made him want to know more about her.

You can buy At His Command – Inspirational Version at any of the online bookstores listed below.