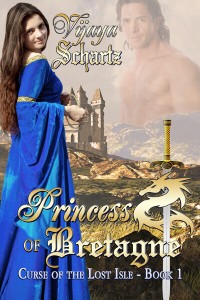 Princess of Bretagne by Vijaya Schartz

806 AD – Alba (Ancient Scotland) – As the Vikings raid the coast of Alba, Pressine of Bretagne sets out to seduce King Elinas of Dumfries, chosen by the Goddess to unite the tribes against the foreign invader. Elinas, still mourning his departed queen, has no intention to remarry. Head-strong and independent, Pressine does not expect to fall for the very attractive, wise and noble ruler… Furthermore, her Pagan nature clashes with the religious fanaticism of the king’s Christian heir, who suspects her unholy ancestry and will stop at nothing to get rid of her.

Read an EXCERPT from Princess of Bretagne:

Without waiting for an invitation, Elinas stormed into the bedchamber.

Pressine shuddered at the loathing in his dark brown eyes.

“Whatever made you think you could violate the apartments of my beloved queen?” Stopping short in the middle of the room, Elinas glanced around, eyes wide with disbelief.

Pressine struggled to sound casual. “Surely your gracious queen would have wanted these rooms light, warm and clean, even alive with laughter, rather than dark, sealed, and stinking of decay.”

The king’s jaw tightened under the short black beard as he towered over her. His hands balled into fists at his sides. “I alone decide in my castle.” The low voice turned to a raucous whisper, more threatening than the shouts of any battlefield. “I shall not tolerate defiance of any kind under my roof. Restore these rooms to their previous state and leave.”

“You dare challenge me?” His surprise would have been comical, if not for the menacing tone.

“The old linens were burned,” Pressine said with a calm she did not feel, as if lecturing a child. She rose to fetch the bundle wrapped in blue silk and handed it to him.

Elinas looked at it suspiciously. “What is it?”

“Her comb, mirror, distaff, spindle, and other keepsakes.” Pressine waved her hand, encompassing the room. “The apartments themselves will never look the way they did before.” She had made certain of that.

The king’s eyes, velvety brown and soft this morning at the spring, now burned with the fiery amber of a wild cat’s glare. Elinas looked ready to pounce. He snatched the bundle from her arm. “Out!”

Pressine showed none of the apprehension gripping her. The king’s heart, beneath the leather gear, had more mettle than she anticipated.

“Remember that I have your sword.” She paused, observing the sobering effect of her words. “Only this morning, you gave it to me, swearing you would honor your oath of keeping me safe in your halls. Does a king’s word count for so little in Strathclyde?”

“I curse the ill fortune that made me hear you sing, lady.” Eyes tightly shut, Elinas tensed, fists at his side, obviously struggling for emotional control. “I should have known that a princess who refuses to bow to the will of men can only bring strife.”

Encouraged by the spark of reason returning to the distraught Elinas, Pressine hoped he could now face his grief. “I am sorry if I offended you. I meant no disrespect.”

“I have enough Vikings, Angles, Picts and Scots to give me trouble. The gods know I do not want feuds in my home.” Stillness made his stare frightening.

Pressine refused to be intimidated. “Will you honor your word and protect me, then?”

“I should throw you to the wolves!” His voice boomed.

“Wolves?” Pressine repressed a chuckle. She loved wolves. “What would your people think of a king who throws a defenseless princess to the wolves?”

“Everyone in the castle expects to see me at your side at the Beltane feast. If I do not attend, there will be questions. The rules of hospitality state that…”

“Let them ask,” Elinas snapped. “The rules of hospitality do not apply to princesses who misbehave!”

“Please, my lord, do not throw me to the wolves!” Pressine dropped to her knees and grabbed his strong legs, gazing up at him. “I promise to behave like a proper lady and heed all your wishes from now on.”

Elinas glanced into her eyes then averted his gaze. “Get up!” he said gruffly. “I spoke in anger. But you better behave as promised.”

“Thank you, my king.” Pressine rose. Her irrepressible smile broadened and she brushed her lips to his cheek. “Does this mean I may stay in these chambers?”

“I see no reason not to anymore.” Elinas pursed his lips and sighed. His slow gaze perused the room. Unshed tears welled in his eyes. “My dear queen’s spirit has left this place.”

Moved by his emotional display, Pressine bowed humbly. “I shall do my best to please you, my lord. I promise.”

Elinas glanced at her riding clothes. “I hope you plan to wear something more suitable for the feast.”

“Do not fear. I will do honor to your hall.” Pressine curtsied. To her surprise, when she raised her gaze Elinas remained standing, staring at her.
“I need my sword,” He said curtly.

“What?” Under no circumstance could Pressine give him back his sword.

“A warrior-king cannot show himself at Beltane without a royal sword.” The dark stubble of his beard twitched.

Opening the chest, Pressine nonchalantly furrowed among the gold and silver jewels to retrieve the wrapped Caliburn imbued with the might of the Goddess. When Pressine faced Elinas again, he stared, gaping at the riches in the open coffer.

“What is all this?” He eyed the contents suspiciously.

“My dowry.” Pressine slowly unwrapped the sword empowered by the ritual in the stone circle. “From my father, King Salomon of Bretagne, and from my aunt, the Lady Morgane.”

The king’s gaze took in the other trunks as well. “You could supply a whole army for many years with that much silver and gold.”

When Pressine unsheathed the blade, it caught the light and shone blue.

“Who did you say your aunt was?” Elinas seemed transfixed by the sight of the magnificent sword.

“Lady Morgane of the Lost Isle.” Pressine presented the weapon to his touch.

“Incredible work.” His hands caressed the blade. “I have never seen such flawless steel.”

“Like the dowry, it will go to my husband in wedlock.” Pressine sheathed the sword and handed it to him. “Would you wear Caliburn tonight, as a token of my good will?”

Elinas gave her a sharp glance as he took the sword. “Do not think this gives you license to oppose or contradict me in any way in front of my liege lords and barons. If you do, I shall have you thrown outside the ramparts in the middle of the night. And the royal Princess of Bretagne will have to contend with the wolves.”

Caliburn in one hand the blue silk bundle in the other, Elinas marched out of the bedchamber. After the door closed, Pressine let out a long breath and her shoulders relaxed. Seducing this king might prove more difficult than she expected, but he was worthy, and she enjoyed a challenge.

You can buy Princess of Bretagne at the online bookstores listed below.