Medieval Romance Monday – Lord of the Blade by Elizabeth Rose 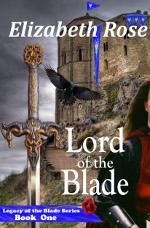 For this week’s Medieval Romance Monday, we are featuring Lord of the Blade by Elizabeth Rose.  The author shared this story with us:

Lord of the Blade will always be special to me, as it was my first ‘baby’ so to speak. I wrote it years ago, being the first medieval romance – actually, the first romance – I ever wrote.

I have always loved anything medieval, with my all-time favorite movie being Lady Hawk. That movie had all the elements I crave – medieval, paranormal (shapeshifting) and of course romance.

I wanted the heroine in Lord of the Blade to be the lord’s servant because I knew how much fun I could have writing that scenario. But once I started, I got so involved in the characters that I decided my hero, Lord Corbett Blake, was a man I wanted to see more of. (So did my heroine, Devon, but that’s beside the point.)

Since he was all alone with no parents, and even his friend the sorcerer missing, I decided to include a few siblings that he could discover in future books. That’s where his sister, Wren, comes in with the second book of the series, Lady Renegade. She has been missing since the age of three, but Corbett does remember her. Her story is complex, but she has been blinded by a marcher lord and leads a band of renegade women. And I have to admit I fell in love with the hero in this story, the Scotsman, Storm MacKeefe. (I do believe you’ll be seeing some of his clan members in upcoming novels.)

Corbett’s mother has died birthing his twin brother and sister. He believes them to have been stolen by the nursemaid and died at sea. That is only partially correct, as we see in the third book of the series, Lord of Illusion.

Madoc ap Powell is Corbett’s long lost brother but neither of them know it. He has been raised as a thief by the disowned wife of a pirate. The heroine, Abigail of Blackmore, is a lady on the run from marrying the evil lord of Shrewsbury. She takes up with the thief, not knowing he plans on bringing her right to the place she is running from – Shrewsbury.

In the fourth book of the series, Lady of the Mist, we see Madoc’s twin sister, Echo. She has been raised by an infamous pirate as the son he never had. The hero, Garrett, is the brother of Abigail and also a baron of the Cinque Ports. He has sworn allegiance to keep the channel safe, and when he encounters Echo’s pirate ship, both their lives take a drastic turn.

Four siblings all with fascinating tales of their own are brought back together in the Legacy of the Blade Series. Each book can stand alone, but characters from the other books are brought in at the beginning and the end. This enables you to see what has happened in their lives, but it may ruin a surprise or two, so I suggest to read them in order if you can.

Please visit my website at elizabethrosenovels.com to read excerpts from each of the books. And thank you once again for your wonderful reviews and support! Watch my website, as the second book in my Elemental Series, The Duke and the Dryad will be released sometime in June, 2013. This is also a medieval, with paranormal elements included.

You can read more about Lord of the Blade right here on Medieval Romances.

HELP A SISTER OUT?

Hey all!  Medieval Romances is graciously allowing me to use this forum to tell you about a unique Kickstarter crowd-funding campaign I’ve created titled, “The White Wolf Prophecy Project.” 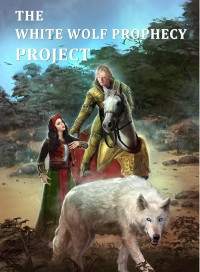 Simply put, I want to incorporate beautiful and vivid illustrations like this into my full-length epic medieval action-adventure romance novel, and thus create a sort of hybrid version of a graphic novel.  It is my vision and goal to visually bring to life the character and action in the story for the enhanced entertainment and enjoyment of the reader.

And to that purpose I want to commission the talented young artist who created the stunning cover art above which I commissioned for book two in The White Wolf Prophecy series called, “The Wolf and The Lily.”

All the details about the campaign, the artist, me, and the book series can be found at Kickstarter.com by its project title or by clicking on this link:

(You will also see a short video on there which is meant to be amusing yet at the same time show you one reason why I created this project campaign.)

In addition, expanded chapter excerpts and other material dealing with this two-book series can be explored at www.readexcerpts.com to give potential backers a good feel for the book’s storylines and its characters.

Crowd-funding sites like Kickstarter are a valuable tool for artists in all fields—but at the same time, it is hard to grab the attention of potential backers because there are literally hundreds of worthy projects to support.    “The White Wolf Prophecy Project” has only been up about a week or so and it has already rapidly sunk beneath the waves of new daily projects.  And, unfortunately, I don’t have a huge network of family and friends to tap into for funding support…which is why I am hoping for the generosity of those strangers reading this blog who might find merit in my project…and even spread the word about it through email, Twitter, Facebook, etc.

So that is why I have come to you for help in reaching my minimum goal amount.  Even a pledge of $5.00 is appreciated, and no monies are collected unless the minimum goal amount is reached by the time the project period ends on June 8.

Please take a few minutes when you can find time to check out the links posted in this message to explore the project, watch the video, and perhaps even read some of the chapter excerpts. (Note: some new bonus Rewards will be added soon for those who contribute $100 or more.)

Help this “sistah” out…and I will do my best to be there for you if and when you or someone you know also create a project for one of the primary crowd-funding sites.   Just let me know!   Thank you.  P. J. Rainis ( aka author R. L. Whittaker, www.rlwhittaker.com)