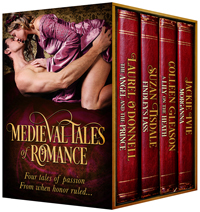 Four tales of medieval romance from four best selling historical romance authors. Four tales of passion from when honor ruled. Enjoy the great value of this boxed set while it lasts!

A LILY ON THE HEATH by COLLEEN GLEASON
When Malcolm du Monde, Lord of Warwick, reluctantly comes to court to find a biddable bride, he expects to woo her, wed and bed her, and be back home in a month. But when he crosses paths with his childhood friend, the fiery-haired (and tempered) Lady Judith, who is now a favorite of the Queen and quite popular at court, Malcolm’s plans go awry.
And when Judith finds herself caught in a dangerous battle between the king and the Queen, she has no one to turn to but Malcolm.

MORGANNA by JACKIE IVIE
HE is the handsome, brawny, charming youngest son of a Sassenach-loving Highland clan. SHE is a woman in hiding as a young man – a weapons champion, bent on vengeance against the Fitzhugh. The only thing worse than being forced to squire for a member of the hated Fitzhugh…is falling in love with him.

THE ANGEL AND THE PRINCE by LAUREL O’DONNELL
In this exciting medieval romance, the French lady knight known as the Angel of Death wages a battle of wills and desires against her dreaded enemy — the English warrior known as the Prince of Darkness.

FINDLEY’S LASS by SUZAN TISDALE
She’d won Findley’s McKenna’s heart without trying and he can only pray for a chance to win hers. But how can Maggy put her trust in a man she barely knows. A madman kidnaps one of her sons and together, Findley and Maggy will stop at nothing to bring the boy home.

About COLLEEN GLEASON — Colleen Gleason is an award-winning, New York Times and USA Today bestselling author who writes in a number of genres. She is most well-known for her Gardella Vampire Hunters series and her Stoker & Holmes series for teens. She lives in the Midwest United States and is always working on her next book.

About JACKIE IVIE — Jackie Ivie is an Internationally Bestselling author of several historical romances through Kensington Publishing, as well as the Brocade Collection and her paranormal series – Vampire Assassin League. Her books have won or been finalists in numerous contests starting with Morganna’s seven awards. She loves to hear from fans at her websites www.jackieivie.com and www.VampireAssassinLeague.com.

About LAUREL O’DONNELL — Laurel O’Donnell is a best selling author and has won numerous awards for her medieval romances, including the International Digital Award and the Holt Medallion Award. Her medieval romances have hit #1 Best Seller status in Amazon’s Medieval Romance category several times. You can visit her website at laurel-odonnell.com to stay up to date on future releases.

Get Medieval Tales of Romance on Amazon now!