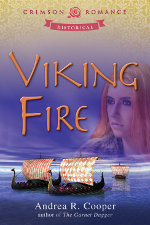 For this week’s Medieval Romance Monday we are featuring Viking Fire by Andrea R. Cooper.

Here is what Andrea has to say about Viking Fire:

“My inspiration for Viking Fire was reading that many historians say “Lochlann” was the Gaelic name for Viking. Since my grandmother’s maiden name was McLauchlin, I was intrigued. Sometimes Vikings would marry into a clan and in exchange for land and a wife, would fight rival clansmen and other Vikings. Even though my heritage is Scottish from my grandmother, the magic and wonder of Ireland made me have the story take place on its emerald shores. I love the medieval period and Vikings. I had to ensure my teenage son when he asked, that “yes, I do know Vikings didn’t have horns on their helmets.” Viking Fire swept me away as I was writing it and I hope you enjoy it as well. It was a time of myth and a little magic.”

You can read more about Viking Fire right here on Medieval Romances.

Viking Fire – a feisty historical romance is currently a Kindle Daily Deal. Only 99 cents for a limited time.  Bram, a cocky viking, must battle stubborn Kaireen for her heart.

Get your copy now at Amazon: http://smarturl.it/VikingFire

Thanks for stopping by.