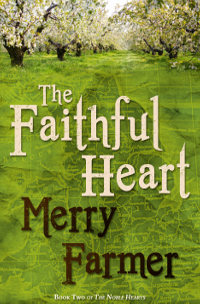 The Faithful Heart by Merry Farmer

“As with the first book in this series [The Loyal Heart], it is un-put-downable! The characters are real, the action is realistic and you really care about it all! Ms. Farmer has a good grip on the history of the period and it comes through.”
– Amazon Reviews

Book Two of The Noble Hearts

Being a noble is all about soft beds and plenty of food, or so Jack Tanner always thought. But the other nobles of Derbyshire still treat him like a dirty peasant, he can do nothing to stop the rash of robberies in the forest, and his enigmatic steward, Simon, knows more about running a manor than he does. To top it off, even the return of Madeline, the love of his life, is overcast by the machinations of the beautiful and cunning Lydia. So when King Richard is captured and Derbyshire is asked to raise an impossible sum of ransom money, Jack must make a sacrifice that destroys his and Madeline’s chance of happiness.

Lady Madeline risked everything when she defied her father and escaped the convent in order to be with Jack. But their long-awaited reunion is ruined by her father’s wrath and the fortune-hunting seductress Lydia. Madeline is smart, but convent life hasn’t prepare her to battle for her man. When Jack becomes Lydia’s captive, literally and figuratively, Madeline must learn to out-maneuver her rival in order to save the man who once saved her from a fate worse than death.

Excerpt from The Faithful Heart

Madeline had never done anything bad in her life. Until now. She yanked the dull gray wimple off of her head and threw it behind a bush, praying that the shadows in the convent gardens would hide her. She crept through the darkness, keeping her hands and body pressed against the wall on her way to the gate. It would be locked this late at night but with the dark to cover her she might be able to climb it and make her escape unnoticed.

An owl hooted nearby and she gasped, eyes flying wide. She held her breath at the flutter of wings that followed and squeezed her eyes shut again, pressing into the wall as if she could become one with the stone. The convent garden was silent but for the rustle of the Spring breeze and the owl. Still she listened, frozen.

Only when she was close to passing out did she let out her breath and resume creeping. Dread over what she was doing, what she had been forced to do, made every step precarious, every pebble a mountain. The gate that separated the prison of the convent from the promise of the outside world loomed like a titan in the dark. She’d worried so much about reaching it without being seen that she hadn’t given much thought to scaling it. Now that she was here its height and the thick iron spikes lining the top gave her second thoughts. She’d climbed trees and walls every day as a child, and brought her father’s wrath down on herself for it, but this challenge gave her pause.

“All problems look bigger in the dark.”

Madeline yelped and spun to press her back against the great iron gate at the whisper behind her. The tiny form of Sister Bernadette shifted out of the shadows. The serene old nun stared at her as if they had met in the cloisters at midday.

“Sister Bernadette, I can explain.” Madeline wasn’t sure how she found her voice. “I was just-”

“If I had a handsome young man waiting for me on the other side I would run as well.”

Madeline closed her gaping mouth and blinked at the woman. She had tried so hard to be good, to obey the rules and forget what was in her heart, but Sister Bernadette knew her too well. All of her resolve, all of the fortitude she had built up since her trip to Derby, since meeting the enigma that was Jack Tanner, melted around her.

“I have to go back to him.” She rushed to grasp Sister Bernadette’s hands. Tears that she had been holding back through months of prayer and punishment flowed. “I can’t live without him, Sister Bernadette. I tried, truly I did, but I can’t.”

“I know, child.” The gentle nun put one frail arm around her shoulders.

“I tried,” she repeated. “I tried to be strong when Mother Superior told me it was a sin to speak of him. I tried to forget him when father refused to let me leave the order. I tried to obey, but….” She gulped at the memories of the confinements, the involuntary fasts, the days on end of prayer on her knees on cold stone floors all winter that had been imposed on her for her rebelliousness. “Oh, Sister Bernadette,” she broke down, “I love him.”

“I know you do.” Sister Bernadette dropped her whisper to the mere hint of sound, walking Madeline to the gate. “You are young, my dear, and the hearts of young women should be filled with love.”

“But I’ve tried to fill my heart with love. With love of God.” Madeline sniffled, wiping her face on the sleeve of her threadbare habit. “It’s what my father wanted.”

Sister Bernadette patted her back. “How can a father expect his young daughter to be faithful to God when she has the love of a handsome red-headed young man?”

Madeline could only stare back at the woman. “Sister Bernadette!” she squeaked, “How can you say that?”

“Easily, my child,” she laughed with a lilt that matched the Spring breeze and smoothed a hand along Madeline’s close-cropped hair. “Was it not your Jack who used to tell you that he never thought you were a nun?”

“Yes.” The memory of Jack’s sly smirk and wink as he held her close and stole a kiss, the only kiss she had ever had in her life, brought her to tears. Jack had flirted with her, said delicious, irreverent things to her, had even rescued her from the tower where Lord Alfred of Buxton had imprisoned her, but he had never once treated her like a nun. “Oh Sister, my father will never approve of Jack. He only believes in power and rules. If he finds out I’ve left the convent….”

“You were not born for this life, my child.” Sister Bernadette laid a hand on the side of her flushed face with a wistful smile. “It was wrong of your father to lock you away here. You were meant for a different world.”

Her protest was cut short as Sister Bernadette drew a loop of iron keys from her belt and stepped past her towards the gate. In nothing but the moonlight she found the key that fit the lock, turned it, and pushed the gate open.

“But what will happen to you?” Madeline gasped.

“What will you say when they find out I’m gone? What will you do if my father comes here looking for answers?” She blanched at the thought and glanced back towards the imposing stone of the convent, second-guessing her decision to run.

Sister Bernadette laughed. The sparkle in the old nun’s eyes reminded Madeline of why in this prison full of gloomy nuns intent on their vows she had never felt alone. “A love like yours should never fear reproach from a mere earthly father.” She shook her head. “Have faith in that if nothing else. Besides, who will tell him how you escaped?” She reached into her pocket again and took out a small coin-purse. “I think it is time I took a vow of silence.”

“Oh no, Sister Bernadette.” She tried to give the money back when the purse was pressed into her hands.

“How I choose to show my devotion is no concern of yours,” she cut the protest short. “Now go, my dear. Derby is a long way off. You have quite a journey ahead of you.”

Madeline wavered, glancing over her shoulder at the rippling field that surrounded the convent. The town of Coventry was half a day’s walk. She had planned to keep to the edge of the forest, to sneak her way back home to Derby, traveling at night so as not to be seen. A few coins could buy her a place on a farmer’s cart or a merchant’s wagon. A few coins could take her to Jack that much sooner.

She closed her hand around the purse and gave Sister Bernadette one last fierce hug. “I’ll never forget you.” The words caught in her throat. “You’ve saved my life.”

The old nun laughed and let her go, walking her through the convent gate and into the world. “Go now, my dear one, but be careful. You’re not free yet.”

You can buy The Faithful Heart at any of the online bookstores listed below.