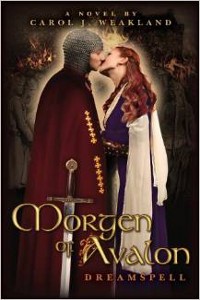 The first book in the Morgen of Avalon series

“The first thing I noticed about Ms. Weakland’s Arthurian themed novel is the quality of the writing.  It seemed to me the author MUST be British, for she uses the English language more beautifully than one usually finds to be the case with Americans.”  – August Hunt, author of The Mysteries of Avalon

“Arthur, you must not die-not yet!”

It was sunset: a thick, blazing epiphany that mirrored the tumultuous day.  Morgen trembled despite herself, witnessing the death of her beloved country.  Every breath, every fiber of her being championed Arthur’s healing, a perilous task that ignored several truths essential to her own existence.  She could not further divide herself by acknowledging the decline of their

homeland – not if she intended to keep her own essence intact.  What did it matter that they had spent twenty odd years securing peace throughout the land?  Peace was an expensive luxury the masses had conveniently abandoned for gain.

A vain throbbed unsympathetically in Morgen’s neck.  She sent out a call to her sisters, those remaining and those dead and watching: Please, will you help me this one last time?  There was no reply.  Britannia, that grand old sovereign, sputtered her final breaths, far too weak to bolster further warfare.  Her wounded and dying were desperate for solace, or anything that might help them avoid decay.  No ultimate victor would emerge this time. Both sides suffered immeasurable casualties, souls that would never be reclaimed.  How many lost entities approached the veil, whispering Morgen’s name?  How many dead Companions lingered, witnessing her efforts, aware that Arthur’s life teetered painfully near the abyss? One slip and it would all be over.  The endless stream of mind-numbing peace work that Morgen and the Sisterhood had conjured over the past twenty-eight years depended on her ability to heal High King Arthur Pendragon, the man she had loved throughout time.

A sob involuntarily escaped Morgen’s lips. Love proved far too insignificant a word to reflect the tiniest particle of what she felt for Arthur.  They were bound as one entity, one heart that honored the same passions, the same goals, although each possessed a decidedly different means of expression.  Perhaps that is why the healing energy surged within Morgen’s hands only to retreat just as rapidly from whence it came.

You can buy Morgen of Avalon: Dreamspell at any of the online bookstores listed below. 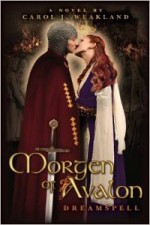