The Duke and the Dryad by Elizabeth Rose (Elemental Series – Book 2: Earth) 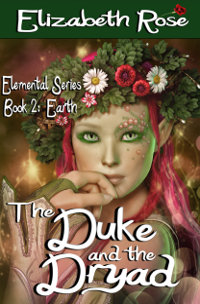 The Duke and the Dryad by Elizabeth Rose

The Duke and the Dryad
Elemental Series
Book 2: Earth

Duke Odwolfe of Manterra is known to his friends as Wolfe, and to his enemies as Duke the Destroyer. When his prized bull goes missing, he sets out to find it. It has been stolen for a sacrifice by the druids who are conducting their pagan ritual in the forest, within the circle of standing stones. And when he finds he is too late to save his animal, he demands one of them come to his castle as his servant in exchange for his loss.

Rae-Nyst is an elemental of the earth, better known as a dryad. She has both fae as well as human blood running through her veins. She gets her power from the earth, however, fire can kill her. And when the Duke of Manterra decides to take her in exchange for his bull, she finds herself not able to fight him, as her power is draining quickly by the flaming torch he keeps waving in her face.

Can a man who believes in nothing but war and destruction accept the exotic fae girl who honors all life instead of death? Or will she have to give up the ways of her nearly extinct kind in order to be with the man who has stolen her heart? Passion and fury rage in an epic adventure as two headstrong people find themselves faced with a dilemma that could either kill them or bring them closer together in The Duke and the Dryad.

Free Preview of The Duke and the Dryad

(Rae is an elemental of the Earth and can command nature. Lord Wolfe’s prized bull has just been stolen and sacrificed by the Druids and he goes to the stone circle to confront them.)

Rae-Nyst hadn’t killed the bull, Humphrey had. She’d grabbed the blade from the druid’s hand when she’d heard the forest crying out to her for help, warning her that Duke the Destroyer had come. His name as well as his hardened reputation was known throughout the lands of Manterra and even neighboring lands such as Thorndale and Lornoon – the villages by the sea. He had on more than one occasion burned towns to the ground in the rage of battle, for reasons no one could quite understand. He had the means to destroy all right, and no morals or qualms about doing it either. He’d take a life without blinking and think naught of it. But now, one bull was sacrificed and he acted like ’twas a catalyst of an all-out war.

She had to be careful not to anger him further. She knew that with one spark of his torch her whole forest could go up in flame. Fire was her weakness and drained the life essence from her quickly. Her feet on the earth, and just touching the trees and plants gave her strength. She was the elemental guardian of the forest, and she would do anything – anything at all to protect it from the likes of people like him.

“I am sorry for your loss,” she said. “But the animal knew ’twas a sacrifice to the gods and gave its life willingly. It did not suffer.”

“Now you are really making me angry with your addlepated words. And mayhap the bull didn’t suffer, but when I am through, every last one of you druids will suffer immensely. Believe me on that one.”

“There is no need for that. I am sure we can think of something to give you in exchange for the bull. Mayhap food from the earth, or even wood if need be.”

“Don’t be ridiculous. That was a prized, rare, white bull, and worth more than any berries or roots you could possibly offer. I need a life for a life. That’s the only fair exchange. Now tell me, do you have any other bulls stashed away for future sacrifices? ’Twould not match my bull’s worth, but being the fair man that I am, I may consider it.”

“Nay,” she answered. “As it was, the sacrifice called for two white bulls, but we only had the one. We live simply. The only animals here are the ones that live off the land in the forest.”

“That will never do, and unless you want a war, you’d better come up with another alternative quickly. I am losing my patience, and I am not known for being a compromising man.”

“Take one of us in exchange,” came the desperate voice of the chief druid.

“What?” Wolfe asked, and noticed the girl’s eyes open wide by the man’s comment, as she seemed just as surprised as he.

“What are you saying, Humphrey?” asked the girl. “That one of you would be willing to go with The Destroyer as a sacrifice?”

“Not a sacrifice,” said Wolfe, “as that won’t replace my loss. I would take one of you back to the castle as my servant instead. ’Twill be someone to tend to my every need and do backbreaking work in my fields each day. Now that I am short an animal, I need someone to pull the plow. That was my breeder you killed as well. Not sure how you’ll remedy that!”

“Take whichever of us you think would best serve your needs, my lord.” Humphrey extended his hand, offering the other druids. They said nothing, just sat there in silence, letting their leader trade them off like cattle being brought to the market.

Wolfe took a look at the druids, and realized he didn’t want any of these heathens within his castle walls. They were weak, praying men, not strong warriors like him. They had no skills with any weapon. Nor did they have knowledge of what happened before or after a battle, should he decide to have them help his squire polish his sword or take the rust off his armor in the process. He sincerely doubted they knew anything about the hard life at a castle, as they’d lived in the forest their entire lives and probably had never done a decent day’s work – ever. They couldn’t plow a field let alone bring him his weapons or even a meal for that matter. All they could do was teach him how to chant or call upon their pagan gods, and that was something he would never do – not even if his own life depended on it. They were worthless! This would never do.

Then his eyes fell on the odd girl again. She looked at him through intense but hooded big green eyes, drinking him in, reminding him of a cat. She was mysterious and alluring, and he couldn’t help feeling she was watching his every move, like a predator stalking its prey. Aye, she stirred his loins in an unusual way. And though he’d ignored it for many years, he did like an oddity. Anything unusual excited him, taking his interest and making him feel alive.

Plus, he was tired of the castle lightskirts. He hadn’t had a decent bedding with a wench worth mentioning in so long that he’d started avoiding his knights when they bragged about the women they’d had and asked him about his own endeavors in exchange. What he needed was someone unusual and exciting. And while she was as worthless as the druids when it came to manual labor, at least this girl could fill one of his other manly needs.

“I’ll take her!” He pointed at her with the tip of his sword. A gasp went up from the druids and he could hear the muffled discussion of voices behind their hands in the dark.

“Nay,” the girl answered, shaking her head. “I am the guardian of my forest, I cannot leave here or who knows what would happen.”

Wolfe had never heard such a pack of lies in his life. Who was this girl that she thought so highly of herself that she believed she commanded the forest? Didn’t she know who he was? She should fear him like the rest of the townsfolk. She obviously didn’t know whom she was denying. Mayhap he needed to remind her.

“These are my forests,” he told her, “not yours. And the only protection they need is from people like the Druids. And since I have been offered one of you in exchange for the life of my bull – I’ll take it. For now. Until I can think of something better.”

“Choose any of us, my lord,” begged the chief druid. “Just leave Rae-Nyst, as she belongs to the forest.”

“I don’t want any of you,” growled Wolfe. “Now I chose the girl and she’ll come with me. She doesn’t belong to the forest. For as of this night, she belongs to me – and would warm my bed.”

You can buy The Duke and the Dryad at any of the online bookstores listed below.