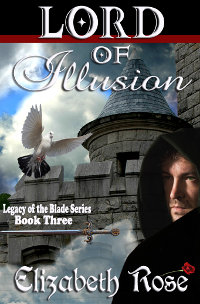 Lord of Illusion by Elizabeth Rose

Madoc ap Powell has been raised by a single mother as a thief. He’s done whatever needed to survive through the years and used his talent of disguises creatively to create illusions that were beneficial in his line of work.

Lady Abigail of Blackmore has no intentions of marrying the evil lord of Shrewsbury. And when her entourage is stopped by a thief on the road, she decides to escape from a life she doesn’t like.

A thief and a lady join together, both desiring the life of each other. But when a romance begins to bloom, they realize they can never be together, in Lord of Illusion.

Excerpt from Lord of Illusion

Lady Abigail of Blackmore sat atop her horse as her entourage escorted her through the forests along the border of Wales. They were headed to Shropshire and she knew the Welsh marauders inhabited these parts frequently. She almost wished they would spring an attack on them, giving her the opportunity to slip away unnoticed. That’s the reason she refused to ride in the wagon insisting on riding her own horse instead. Just last week they had been attacked by bandits, and if she had had a horse instead of being inside the wagon, she would have been free.

Once again, she was trapped. She was being sent by her father to the vile Lord Lionel of Shrewsbury. She was naught more than a bargaining tool, sent to marry the man in order to set her brother free. Nearly a year now her brother, Garrett, had been imprisoned by the man’s late father and lord of the castle, Lord Shrewsbury, over naught more than jealousy. Abigail’s father had stolen Lord Shrewsbury’s betrothed and their dispute had lasted over two decades. But now, by the hand of God – in the form of the plague – both her mother and Lord Shrewsbury were dead.

Both sides were being punished by God for their insolence, however it was she who would serve the punishment of her father’s sins. One would think that with the deaths, this would end the dispute, but nay. Now Shrewsbury’s son, Lionel, thought to benefit in the process. Before he would release Garrett from the bowels of the castle, she would be sacrificed. Her life was doomed, as she was promised to give herself to the man.

She loved her brother and cared about his return, but there was no way she wanted to be a pawn in their gregarious game. She was tired of her father’s decisions and also tired of being a titled lady. No longer did she want to live by rules and be told what to do every minute of the day. She’d run away from the castle several times this past month alone, and her father, Lord Oswald, had no more patience for her. That, in itself, was probably what finalized his agreement to send her away.

He decided she would be better watched after if she were married. Not to mention, after the disappearance at sea of her other brother, Edgar, a son to him was more valuable than a daughter. So he’d given her hand away in marriage, and as part of the bargain included a very wealthy dowry as well. Of course, part of that dowry was already gone – stolen along the road by thieves just last week. Her entourage had turned back to the castle afterward at her suggestion, but now, once again, they headed for Shrewsbury with dowry in tow.

She rode toward her doom. She headed to the greedy man’s castle against her will, to be his new bride. Thoughts ran rampant through her head of how she was going to dodge her men. She was well guarded, and the only chance she’d have was for a distraction, god willing, that would enable her escape and not threaten or take her life in the process. The last robbery had given them an excuse to go back home, but ’twas by her father’s orders that this time they continue no matter what happens.

“Halt,” called the guard from the front of the line. “There’s a man down in the road.”

Abigail’s head snapped up, spying a prone man in a hooded robe on the ground. She couldn’t see his face, just his grayish-white beard. Her eyes quickly searched the trees of the forest. This could very well be an attack – and at the same time, her means of escape.

“What is happening?” she asked the guard next to her.

“There’s an old man fallen in the road. Probably just a peddler.”

The guard at the front of the line lowered himself from the horse, looking to the trees, scanning the grounds. All the guards sat at the ready, hands on the hilt of their swords should they be ambushed again. Abigail watched as the guard up front walked to the man and leaned over to lend him a helping hand.

The man in the road hobbled to a standing position, grabbing on to the guard for support as he did so. He looked to be tall, but it was hard to tell since he was so bent over. Her heart sank. This was only an old man in need of assistance, naught else. Then, to her surprise, from where she was stationed she could see him pilfer the guard’s pouch. None of the soldiers noticed, as they were too busy looking to the trees for marauders.

“Many thanks, stranger,” came the old man’s crackly voice as the group continued forward. He then headed off quickly toward the woods. She couldn’t believe what fools her father’s men were and also how trusting. Was she the only one who really knew what just happened?

“Stop him!” she called, and the old man sped up through the forest. She could see he had a horse hidden in the brush, as the animal came forward to meet him. “Stop him, I say. Cannot you see that man just stole your coin?”

When they didn’t hear her at first at the front of the line, she turned toward the guard who protected her. “Go!” she commanded, “anon. Tell them what happened and go after the thief.”

“Aye, m’lady,” he said, kicking his heels into his horse to move forward. She heard the shouts and saw the thief disappearing into the woods. Just the distraction she needed. With not a one of her men watching her, she took the opportunity to head in the opposite direction and disappear into the foliage before they even knew she was missing.

She rode her steed hard through the woods, branches scratching her skin and tearing at her traveling clothes. Still, she did not care. One glance over her shoulder told her she was yet to be followed. But when she looked a second time, a rider on horseback approached her, gaining on her quickly. In her carelessness, she misdirected her horse and it reared up, causing her to fall from her sidesaddle to the hard ground far below. The rider came up behind her and two strong arms pulled her to her feet.

“Nay!” she shouted, pushing him away, “I won’t go with you to marry that ogre.”

That’s when she realized he wasn’t a guard at all, but rather the old man in the road who’d robbed them.

“Let go of me,” she cried, and in her struggles the man’s hood slipped from his head. Though he had a beard and eyebrows of nearly white, the hair on his head was dark as a starless night.

“Hold still,” the man ground out – a young man’s voice slipping from his lips instead of the old crackly voice she’d heard on the road.

“You are not an old man,” she accused him. “You are an imposter. Who are you?”

Madoc ap Powell looked at the beautiful woman before him, demanding his name as if he would really tell her.

“Who are you?” he asked in return.

“I am Lady Abigail of Blackmore,” she retorted. “And I demand you release me.”

“You, my lady, are the one who alerted the guards to my actions and almost got me killed.” She was a feisty wench, he’d give her that. And twice as observant as any of the guards.

“They will kill you,” she said. “Just as soon as they follow – which will be at any moment now.”

“Nay, my lady. That is where you are wrong. For at this moment they are fighting off a band of marauders who are headed in the opposite direction. I sincerely doubt they’ve even noticed you are missing.”

“So you set up an attack and now you come for me?”

“I had naught to do with the attack. I work on my own. I just happened upon the opportunity before they did, that’s all.”

“Work?” she mimicked the word he’d used. “Hah. I sincerely doubt you have ever worked an honest day in your life. And I do not like to be referred to as an opportunity.”

Once again she was very observant, although he had worked at an honest job for a few years of his life. But he’d seen where honest work had gotten him when he’d ended up in the dungeon. Nay, what he did now was the better of the choices, and also what his mother had taught him to do from childhood.

He took a sheep bladder filled with water from his side, and splashed it upon his face to rid himself of his disguise. The white powder in his beard and mustache washed out, leaving it as dark as the hair on his head. The powder in his eyebrows followed. He gave a sharp intake of breath at the coldness on his skin, then took a swig of the water and offered her some.

“Nay,” she said, turning her head, and when she tried to walk away, he realized her gown had caught on a branch.

“Well, Lady Abigail, I see your escape is foiled. You are caught not only by me but also by the guardians of nature.”

“I wasn’t trying to escape!” she exclaimed.

When she looked back up to him, he couldn’t help but notice her beauty. A few years younger than he, she seemed to be mayhap one and twenty summers. Her hair was golden silk, spun from the faeries of the forest themselves. Her eyes blue – deep blue – and clear like that of a midsummer’s night sky. And her skin was alabaster and looked soft and supple.

“Well I am glad to hear you were not trying to escape,” he told her. “Because then you’ll be willing to come with me when I return you for a reward.”

You can buy Lord of Illusion at any of the online bookstores listed below.