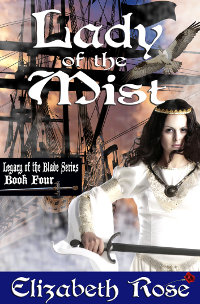 Lady of the Mist by Elizabeth Rose

Garrett of Blackmore is a Baron of the Cinque Ports. He has sworn his allegiance to King Edward III to keep the channel safe from pirates.

Echo is the daughter of an infamous pirate aboard their ship the Seahawk. When one of the king’s men accidentally gets stranded on her ship in the midst of a storm, she realizes he has ties to her past.

And when Garrett realizes Echo has something he wants, he must pass her off as a lady in order to get it. A pirate and a baron find what they need in each other, but they both need to change in order for plans to succeed in Lady of the Mist.

Free Preview of Lady of the Mist

Garrett made his way to the forecastle and climbed the raised platform as they approached the other ship. Sure enough, black sails. This was the pirate ship he’d been searching for. What a discovery to finally find it.

The wind picked up from the approaching storm, filling the single square sail of the cog. The clinker-built hull had high sides, which served as good protection from marauders of the sea. However, this was a merchant ship and the flat bottom was designed for loading and unloading cargo in shallow ports, it wasn’t designed for rough seas. It could very well capsize in a strong wind. The ship held one hundred tuns in the hold, but now they were traveling light, at only half its capacity. This made him nervous. Garrett eyed the dark roiling sky overhead. He knew what he had to do, but still the crew’s safety concerned him.

“Archers, prepare,” he cried. “Silas, take her in close, I am going to board off the forecastle. Get the grappling hooks and ropes ready,” he called over his shoulder as they came up alongside the ship.

Garrett saw the crew of his target rushing around, looking very disorganized. He would be able to use this to his advantage. But the man in the lookout could have a weapon to throw or something to drop. He looked up and aimed his crossbow. He couldn’t allow himself to be a sitting target from the man up above. He pulled back the windlass, and lined up his bolt for the shot.

Echo quickly replaced her cap, tucking her hair underneath. She would never be able to fight with her hair in her eyes, now that the wind had picked up tremendously. Skye and the male osprey flew in circles just above the ship and she knew they wanted to land in the nest to get out of the storm.

She looked down to the deck from the lookout basket to see her father and the crew running around aimlessly, trying to prepare for the battle about to take place. She knew if they hadn’t been soused, they would have already been boarding and attacking the Cinque Ports ship.

“Hard to starboard,” shouted her father, giving the sternsman the order to turn the ship. The Seahawk bounced and tilted in the high waves that the storm now brought upon them. A gale of wind hit Echo head on, nearly knocking her from the basket. “Go to half sail,” shouted her father, but Echo knew that was going to be impossible now that they had to concentrate on the attack. The cold, sharp rain sliced down upon her like arrows from an archer’s bow.

That’s when she spied the man aboard the Cinque Ports ship upon the forecastle and aiming his crossbow right at her! She barely had time to dodge out of the way of his bolt, and caught herself as the ship jerked and she had to grab on to the pole mast in the basket in order not to be thrown out.

The sickening shriek of a bird brought her attention upward, to see the man’s bolt lodged into one of the hawks, taking it down into the sea.

“Nay!” she cried, not knowing if it were Skye or the male hawk that just went to its death at the hands of her attackers. The ship leaned once again and the two eggs rolled out of the nest and through the slats in the basket and over the side. She watched in horror as they plummeted down to the deck far below. “Damnation and hellfire,” she shouted, first looking to the path the eggs had taken and then back to the passenger from the Cinque Ports who was jumping from his fighting post by aid of the bowsprit and boarding their ship even before his crew tossed the grappling lines.

“Attack!” shouted her father from below her. The crew of the Seahawk picked up long wooden poles with spikes and axes and rushed toward the side of the ship. The Cinque Ports crew was just throwing their grappling hooks aboard, but nature took its course and one more huge gust of wind changed the outcome for everyone.

Garrett watched in disbelief as the wind hit their single square sail head on and sent his ship backwards away from the vessel he now stood upon. His archers opened fire from the castle decks, but the strong winds sent their arrows off course. While several landed on deck, not a one hit its mark. He feared for his men in the storm and now he feared for his own life as well. He stood alone amiss a band of cutthroats that would most likely kill him before they’d had their breakfast.

“Damn!” The ships separated so quickly in the storm that he knew there would be no retribution for these pirates now. He could only hope Silas headed the ship for Great Yarmouth as he’d instructed, and not be capsized in the storm.

He turned and raised his crossbow as two of the crew rushed him. He managed to loose one bolt and it grazed the shoulder of a man who cried out. The weapon was too bulky and the windlass too slow to load quickly. He threw it down and pulled his sword from his side instead. But before he even had a chance to use it, someone from up in the rigging dropped atop him, knocking him to the ground.

His sword was knocked out of his hand from the impact, and he reached for the dagger at his waist instead. The attacker’s small hand reached out in a strong grip, digging his nails into Garrett’s wrist, trying to make him release it. The edge of the man’s sword rested against his throat as the rest of the rowdy crew came forward and urged the man on.

Garrett managed to unarm the man, and in the tossing of the ship from the waves, their bodies rolled together over the deck only to be stopped by the planking of the ship’s wall.

He didn’t understand why none of the rest of the men stepped in to seize him. Instead, they almost found it amusing to watch him and this young man struggle. He managed to pin his attacker to the ground, and hold his dagger to the man’s throat. The pirates behind him laughed and shouted in the pouring rain. Water dripped down off his long hair and hit the pinned man in the eyes.

The men laughed behind him, and Garrett now thought he understood why. This man’s voice was high and his body small, but if his instincts served him correctly, he’d been fooled. He yanked the man’s cap from his head and ebony tresses spilled around his captor’s head. As he looked closer at the man’s face through the dirt and grime, he realized this was not a man at all, but a woman!

You can buy Lady of the Mist at any of the online bookstores listed below.