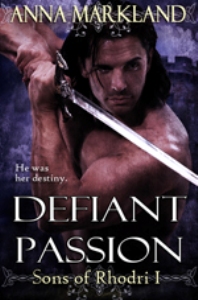 Book 1 in the Sons of Rhodri Series

“What a wonderful escape into history. This is the first book I’ve read by Ms. Markland and it won’t be the last. I truly enjoyed being in her story world. She knows how to make history come to life with fantastic, realistic details and characters you can’t help but love and root for. I also enjoyed her writing style!”
– Vonda Sinclair, author of My Wild Highlander.

Readers of the epic novel “Conquering Passion” who fell in love with Welsh villain-turned-hero, Rhodri, asked for more and Ms. Markland delivered. You’ll enjoy this reprise of the full story of his life. This novella sets the stage for Books Two and Three of the Sons of Rhodri Series -juicy historical fiction at its best.

The nightmare came again. The keening lament of the dispossessed. Gaunt faces of hunger and desperation.

Rhodri sat up abruptly, drenched in sweat. He shivered, running his hands through his matted hair. Had he cried out? A deer hide separated his niche in the hall of the mountain fortress from the communal sleeping area of his men, but sounds travelled. He was their leader now after his father’s untimely death. He must never show weakness. They looked to him, despite his youth.

He stretched his arms around his bent legs, and pressed his forehead to his knees, willing his body to cool and his heart to slow. Hasten the day the fortress would be completed, then he would have his own chamber, as he did in his comfortable home in Powwydd.

He held his breath and listened. The wind moaned through the timbers in its relentless descent from the surrounding crags. The sounds of men deep in slumber filled the air. They slept the sleep of the dead after long back-breaking hours spent erecting this impregnable fortification in the mountains of Wales. It had been no easy task, but they needed a secure, hidden base for their attacks on the arrogant English. Cadair Berwyn was the perfect location, tucked away where no one could find it.

Here they could speak their native Cymraeg without caring that the hated Anglos called it Walhaz. It might be foreign to them, but to Rhodri’s people it was part of the identity they had fought to protect for hundreds of years. Here they could be the children of Cymru.

Rhodri lay down on his side and pulled the brychan over him, the late October air chilly on his naked skin. The amber beads around his neck shifted. He fingered them lovingly. His mother had crafted them. “A memory of me,” she had whispered. “After I’m gone.”

Now his whole family was indeed gone, swept away by a pestilence that had scythed down many. Had Rhodri not been at Cadair Berwyn, he too might have succumbed to its merciless march though the villages of Powwydd.

The aroma of frying food wafted into his nostrils, though the stone kitchens were some distance away from the wooden fortress. The cooks must be up and about. Dawn would break soon, bringing another day of challenges as the champion of an oppressed people.

Rhodri did not lack for courage but felt keenly the solitary nature of his position as Prince of Powwydd. It was a lonely life. No woman wanted to live with a rebel chieftain, hidden away for months in the mountains after raiding forays into lands they had once called their own.

At the funeral for his family, his father’s ally, Morgan ap Talfryn had raised the possibility of a betrothal with his daughter, Morwenna. She had been present at the rites in Powwydd. She was but a girl of eleven, eight years his junior, but he had been reluctantly drawn to her promising breasts and long blonde hair. Her smile had been—suggestive.

Restless, he pulled the brychan off his arms and settled it round his waist. The wool irritated the knotted designs newly etched into his biceps—symbol of his chieftaincy. He turned onto his back and stretched, cursing that his thoughts of generous breasts had aroused him. He cupped his ceilliau and shifted his weight to relieve the ache. Perhaps he should take Morgan up on the offer—but there was something about Morwenna made him hesitate.

He could not put off rising much longer. He must not be the last abed. He was reluctant to rise this day, a foreboding hanging over him they would receive bad tidings. His premonitions were not often wrong.

Messages had come two days before with news that the newly crowned king of the English Saxons, Harold Godwinson, was on his way back to the south with his army. They had won a hard-fought battle at Stamford Bridge, in the north of England, defeating the Norwegians. The Viking king, Harald Hardråda had been slain in his bid to steal the throne of the English. Now Harold Godwinson journeyed to face another threat on the south coast.

Informants had told Rhodri that William of Normandie waited with a fleet to invade England, intent on seizing the throne which he claimed his cousin, Edward the Confessor, had promised to him. The wind had only to change.

Rhodri scratched the stubble of his morning beard. The consequences for his people of either side being victorious weighed heavily on his mind. Harold’s army would be tired after the battle and the long trek back to the south. But the Saxons were a formidable fighting force, their shield wall impregnable, battle axes lethal.

From what Rhodri knew of William, Duke of the Normans, his strength lay in his mounted knights. He had a reputation as a brutal man who brooked no opposition. Heaven help Cymru if the Normans won! But how could the Normans get their horses across the Narrow Sea? In any case, a horse was no match for an axe.

Better the enemy you know!

Rhodri clenched his jaw. So many greedy men. Would his people ever be left in peace to live their lives in their own country, or would they be driven further into the wild mountains?

He thrust the brychan to the floor, pulled on his tunic, leggings and boots and strode off to break his fast with whatever it was that smelled so good.

You can buy Defiant Passion at any of the online bookstores listed below. 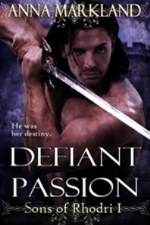