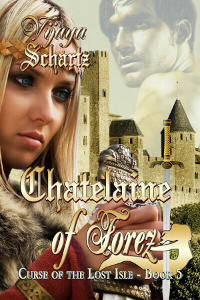 Chatelaine of Forez by Vijaya Schartz

1028 AD – Afflicted by the ondine curse, Melusine seeks the soul of her lost beloved in the young Artaud of Forez, who reigns over the verdant hills south of Burgundy, on the road of pilgrims, troubadours and merchants. But this dark and brooding Pagan lord is not at all what she expected or even hoped. He knows nothing of their past love, her Fae nature, or her secret curse. Must Melusine seduce and betroth this cold stranger to satisfy the Goddess and redeem her curse?

The gold in the rivers instills greed in the powerful, and many envy the rich Lord of Forez, including his most trusted vassals… even the Bishop of Lyon. When Artaud’s attraction to Melusine makes them the target of a holy hunt, will she find redemption from the curse, or will they burn at the stake?

Free Preview of Chatelaine of Forez

Melusine stopped singing and shuddered in the cool water. Someone was coming. Fast approaching hooves trampled the underbrush. She straightened and gripped the well worn sides of the rectangular stone basin. Birds and insects had ceased their chirping. Through the trees, a single horseman on a black stallion galloped up the forested path to the sacred spring where she bathed.

How had he crossed the magic barrier she’d erected down the hill? Could he be an immortal like her?

She glanced at her blue robes, left in the middle of the clearing, at the foot of the tall, standing stone hugging the statue of the Great Goddess. Too far away. No time to step out of the catch basin and retrieve them. With a flurry of the hand, she wove a quick invisibility spell and willed the water around her to still.

Her heart stumbled for a beat or two. This could be the blessed day the Great Goddess had promised her. The day she finally met her former beloved… Sigefroi. Although, in his new incarnation, he wore another name.

The horseman emerged from the curtain of trees, impossibly tall, dark, muscular, in black leather gear, a crossbow across his back. A sword slapped his thigh, and a hunting knife adorned his belt. Half a dozen bloody hares hung from the back of his saddle. Definitely not her beloved Sigefroi. What now?

The stranger glanced at her, raised a dark brow and nodded a salute from the saddle. A restrained smile touched his lips. How could he possibly see her through the invisibility spell? But he’d already crossed her privacy barrier. Fae blood definitely coursed through his veins.

Melusine shrunk into her chilly bath, dreading to face him naked.

It could be worse. It could be the first Wednesday of the month, when the curse made her a serpent from the waist down. In this increasingly Christian land, discovery in ondine form could cost her to burn at the stake.

Since the local Christians avoided Pagan shrines, however, the stranger must be of the old faith.

She took a deep breath and made her voice as formidable and intimidating as she could. “Who dares violate the sacred spring of the Great One?”

Melusine’s heartbeat faltered. Not an immortal, but worse. “Artaud of Forez?”

“I own this land, and methinks you are the one trespassing.” He dismounted with surprising agility for his size, sliding off the saddle like an acrobat.

Melusine scrutinized the young man. According to the Goddess, Artaud had inherited the soul of her late Sigefroi, but how could it be, when they looked like opposites. Where Sigefroi had been wiry and fair, with gold reddish hair and a clear gaze, Artaud had broad shoulders, straight black hair, a hale face, and a dark, brooding gaze, as deep as a lake on a moonless night. Both looked fearsome, but in different ways.

Count Artaud led his prancing stallion closer to the large rectangular basin where she bathed.

Dear Goddess! Heat crept up Melusine’s cheeks. She gathered her legs and encircled her knees with her arms for modesty. “How dare you!”

“My horse is thirsty.” His voice held a subtle challenge.

The black stallion snorted as its master freed him. The beast drank noisily from the far end of the long basin.

Count Artaud cast her a sidelong glance, his swarthy, square face unreadable. “The Great One would want to quench an animal’s thirst.”

“Only a Pagan would know the Great One respects all creatures as equal.” Melusine kept her voice even, but anger gripped her insides. How could this Artaud hold the soul of her beloved? He was a cold, dark stranger, not her fiery knight of old.

His brow shot up. “I fear you have me at a disadvantage, my lady. I have never seen you at court or on my estates. Who might you be?”

Although she’d known they would soon meet, Melusine had no ready answer. An ondine? A cursed immortal? The woman you are destined to marry? The love of your past life? The enchantress who might bring your doom? She couldn’t find words he might accept, even less understand. While she remembered their lifetime together, he did not.

No sympathy softened the neutral face as his dark stare pierced her. He removed his black leather gloves and sat on a jutting stone next to the well worn edge of the old basin. “Devil got your tongue?”

Visions of hellish creatures flashed upon Melusine’s mind at his mention of the devil. Christians believed in the devil… and Christians wanted her dead.

“Melusine…” She cleared her choking voice. “My name is Melusine.”

She fancied her first name innocuous enough. Better than Melusine the Fae, immortal, cursed by the Great One, excommunicated First Lady of Luxembourg, the love and the bane of your past existence.

“Lady Melusine…” He rolled the words on his tongue. His dark, liquid eyes softened and unfocused slightly. “An unusual name for an unusual woman.”

“‘Tis an ancient name, my lord.” Tempted to prod his mind and find out what he thought of her, she stopped herself. If he could see through her spells, and Fae blood coursed through his veins, like Sigefroi, he would be impervious to her magic… but not to her charms.

Changing tactic, she smiled and relaxed against the hollowed stone basin, exposing her submersed nudity through the clear water. “I hear you have done well, Lord Artaud. Your lands of Lyon and Forez thrive, and your people consider you a fair and wise ruler.”

He cast her a sidelong glance, then shifted his gaze to the statue of the Great One dominating the clearing. The quenched black stallion walked away a few paces and grazed the luscious grass of the hillock.

Awe widened his eyes as he faced her again. “What else have you heard about me?”

Although Melusine had kept her promise not to spy on Artaud, she knew a few things about him. “The river gold makes you richer than any king. So does the trade on the pilgrimage road to St Jacques of Compostella. Travelers speak highly of your hospitality.”

Bird trills and the chirping of insects had resumed, and the sweet scent of wild flowers filled the air with vibrant life.

“What you hear is true.” He faced her but kept his gaze at eye level. “I’m also a Pagan count ruling over Christian barons. That alone can get you killed these days.”

“Then we have much in common, my lord.” Melusine smiled seductively. “Only a devout Pagan would visit the sacred spring and the shrine of the Great One. Why else would you come here?”

He barely cracked a thin smile. “To water my horse.”

His jest bothered her. So did his cool response to her charms. Hard as she tried, Melusine could not see in this man any remnant of her past love.

Had she waited these few decades for naught? Had the Great One tricked her? No. The Great One never lied. Still, even though Melusine did not intend to share this stranger’s fate, she should warn him of the dangers threatening his rule.

She trailed her fingers on the water surface, blurring it. “This hill is not just a sacred shrine from time immemorial, Lord Artaud.”

His dark gaze alighted upon her with a new spark of interest. “State your meaning.”

“‘Tis the site of your future castle of Montarcher.”

Suspicion narrowed his eyes. “How do you know of my future designs?”

Melusine’s heart skipped a beat. “The Great One sees and knows all, my lord. You must build your castle in haste to face the coming dangers.”

A muscle in his square jaw jumped. “What dangers?”

“Your enemies are gathering.” Melusine didn’t know the future, only that Artaud would need help. “Many envy your riches, my lord. Others resent your faith. But from here, you can fend them off.”

“Why here?” His tone held curiosity.

Melusine straightened and gazed in the distance. She was destined to protect him, but she felt naught for this stranger. “This is a sacred site, my lord. From here, the statue of the Great One will bless and protect all your lands.”

His brow rose and his eyes softened but still stared at her. “Truly?”

Melusine shrank under his scrutiny, wishing she wore clothes. “Truly, my lord.”

“Thank you for the warning, my lady.” He rose and whistled. His stallion trotted up to him. In one light vault, Artaud landed in the saddle.

Melusine’s heart jumped. Had she done right, or had she spoiled everything? In any case, she must speak with the Great One. There must be a mistake. She could never love this dark, brooding man. He was not her long lost love.

You can buy Chatelaine of Forez at the online bookstores listed below. 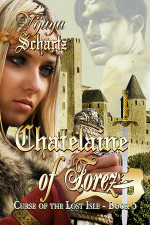