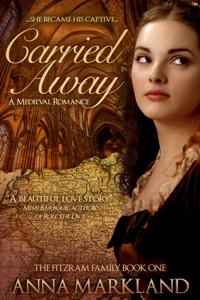 Carried Away by Anna Markland

“I would love to have more romance books set in Germany! I am half German and would love to see some set in the Black Forest.”
– Christine Jenschke, Amazon Reviewer

“This was a lovely read that had everything. A beautiful love story, battles, a kidnapping and a window into the politics and monarchy of the time.”
– Mimi Barbour, author

“This was well done. I enjoyed it.”
– ScarletGramma-Amazon Reviewer

Count Dieter Von Wolfenberg and his followers plan to kidnap the Empress to force Holy Roman Emperor Heinrich to withdraw from the city of Cologne. But things go awry when Blythe FitzRam, the Empress’s lady in waiting, is taken by mistake.

He kidnapped her but she stole his heart.

Free Preview of Carried Away

[Blythe FitzRam, an English woman, has gone to Germany to be a lady-in-waiting to King Henry’s daughter who has married the Holy Roman Emperor, Heinrich.  Factions in the Empire are conspiring against Heinrich’s rule. They plan to kidnap the Empress.]

The daily excursion to accompany the Queen to morning mass was at least a relief from the boredom of Blythe’s routine. She was learning a few German words, but finding it difficult. The Queen was bored too and spent most of her day changing outfits, for which Blythe was responsible. She supposed she should be flattered to be the Queen’s ‘favorite’! In all the years she had been in service to Matilda, she had never taken a liking to the child, who had grown more arrogant as time went on. Her Majesty had done nothing to provide her ladies with a more suitable wardrobe. She refused to learn German and complained constantly about the German courtiers who surrounded her.

Blythe wondered how Matilda and Heinrich were ever going to communicate.

Perhaps he doesn’t care about communicating, only getting her with child.

Her attention wandered quite a bit these days. Homesick for England, she missed her family. She knelt for the Invocation of the Holy Spirit, the droning voice of the priest lulling her to sleep. She stifled a yawn, but was abruptly jarred awake by a gloved hand pressed firmly over her mouth. She struggled and tried to scream, but tasted leather. Heart racing, she was dragged unceremoniously over the back of the bench by a strong arm clamped around her ribcage. Her attacker kept his other hand over her mouth. Screams rent the air. Blythe squeezed her eyes tight shut, hoping when she reopened them, this nightmare would be a dream.

It was only too real. Lady Dorothea lay in a crumpled heap a few feet from the altar. Five Imperial guards had formed a shield in front of their Empress and were fighting off a group of masked men. Booted feet echoed off the stone floor, running, coming closer. Male voices shouted in anger and alarm. Matilda cowered behind her guards with the priest, pressing herself up against the altar, a terrified little girl. “I should have been with her,” Blythe thought wildly. “I could have protected her.”

Breathing became difficult. Her eyes watered. Her feet touched the floor for an instant, then she was hoisted over a broad male shoulder, forcing the air out of her lungs with anoomph. The man carried her out of the cathedral, moving quickly. His shoulder jarred her belly as he loped along. She pounded his back with her fists. It was like hitting a wall. She braced her hands against him, trying to get air into her lungs. Even through the leather of his hauberk he was rigid, hard-bodied, all muscle. A thrill of fear coupled with indignation swept over her. Now free to scream, she did so—loudly. Without warning, she was jerked back to her feet. The cold blue eyes of a swarthy man bore into her. He pulled down his mask, smiled at her laconically and said in French, “You will deafen me if you scream in my ear, milady.”

She gulped air as he coolly appraised the décolletage of her dress, his deep voice penetrating to her belly. Her mind whirled. Before she could utter a word he had gagged her and she was back over his shoulder, his right arm wrapped around her thighs, his left fending off another Imperial guard with his sword.

A deadly lunge dispatched the guard and the man loped on, sword in hand, towards the ancient church of St. Johannis. He paused for a moment behind a pillar, listening. Blythe forced down the bile rising in her throat.

She tried to catch her breath, but then he was moving again, with greater stealth. Blood rushed to her throbbing head and fleeting images swirled. The man reached a small door, opened it carefully, and bent to clear the jamb. Her skirts rustled against the wood as he eased her through. She made the mistake of raising her head, and banged it hard on the wooden frame.

Still clinging desperately to his hauberk with one hand, she touched the other to her head, half expecting to feel blood oozing. The gag prevented anything more than a grunt.

He stepped outside and reached to untie the reins of a tethered black stallion. He set her on her feet and mounted the horse. For one blessed moment she hoped he would ride away without her, but he leaned down and held out his hand. He must have seen the flicker of hesitation in her eyes. “I will kill you if you run,” he said softly in English.

You can buy Carried Away at any of the online bookstores listed below. 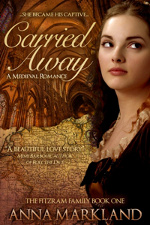